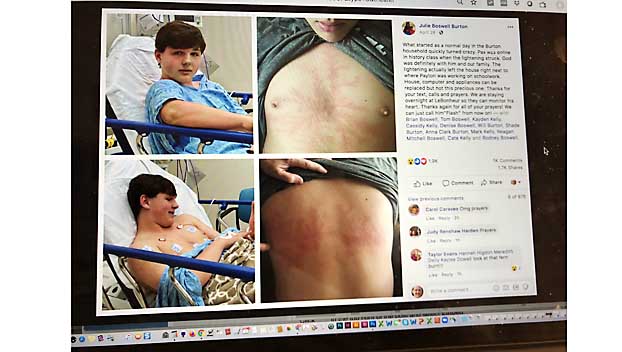 A Mississippi family was counting its blessings last week after one of their sons was injured when lightning struck their house and an electrical charge passed through his body, leaving an unusual mark on his chest.

Julie Boswell Burton, the mother of Payton Burton, posted some details of their story on public Facebook posts.

“What started as a normal day in the Burton household quickly turned crazy,” she wrote. “Pax was online in history class when the lightning struck. God was definitely with him and our family.”

Payton’s mother wrote that the lightning exited the house near were he was working on school work.

He was treated and later released from LeBonheur Children’s Hospital in Memphis.

The lightning left red marks streaking from the center of Payton’s chest, visible in a photo his mother shared on Facebook. The red streaks looked a little like lightning.

“Thanks again for all of your prayers! We can just call him ‘Flash’ from now on!” Julie Burton wrote on Facebook.

Stuck Mississippi horse gets a little lift from his…