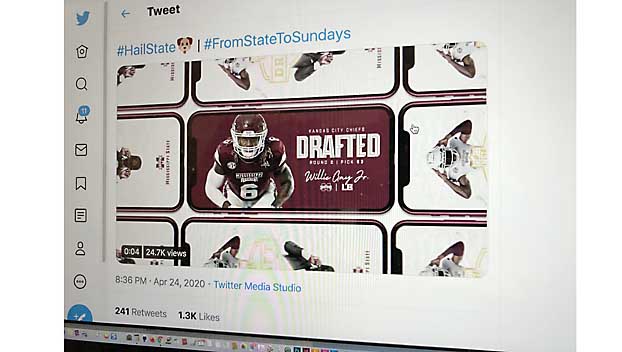 It starts with a ring.

The animated cell phone in the middle of the screen buzzes twice. It’s the NFL. Starkville native and former Mississippi State linebacker Willie Gay Jr. has just been drafted by the Kansas City Chiefs.

At the least, the brief video released by the MSU football Twitter account Friday night offered a momentary distraction from the isolation and trying times society has endured since the COVID-19 pandemic began.

But on a deeper level, it was a look at the months of planning the athletic department’s graphic design team endured for three nights’ worth of engaging content during this past weekend’s NFL Draft.

“It’s nice to come in and wear 100 hats, but at the same time when you collaborate with so many creative minds it’s amazing and just benefits everything,” Senior Director of Creative Strategy Dan Brown told The Dispatch. “We’re kind of like the Avengers — I mean that’s why you put together a superhero team.”

PLANNING DESIGNS
The graphic design plan for each year’s draft theoretically starts at the conclusion of the prior season’s event.

Brown, who’s nearing his four-year anniversary at MSU following stops at the NFL Network and the University of Florida, and the 11-person creative department constantly brainstorm ideas throughout the year. The group also pokes around to see what other universities have done to promote their players.

Preparations begin in earnest in January as Brown and Director of Football Creative Media Mitchell Bernardo, among others, organize the logistics of the next few months.

Following a similar path to Brown, Bernardo worked at Georgia Southern as a sports video assistant during his undergraduate years. He next spent just over three years at Tulane in varying roles, most notably as the director of football video operations, before heading to Starkville in August.

Throughout the season, Bernardo is tasked with shooting video of the football team during practices and games. As the NFL draft nears, he whittles down what’s been shot so Brown can integrate the film with social media graphics to promote MSU players as they are selected.

“I think the main point and what we’re doing is just bringing that excitement to one of our own players making their dreams come true and making it to that next level,” Bernardo told The Dispatch. “So whatever we can do to just pump it up for our fans for recruits to see and for the NFL team’s fans, getting them excited to have a Mississippi State player on their team.”

Film from February’s NFL scouting combine is also incorporated into the plan.

While media members aren’t allowed into the stadium, MSU’s contingent shot video of workouts ranging from the 40-yard dash to the bench press during the annual event held in Indianapolis.

Short sound bites off to the side of media obligations were also included.

“What the NFL has allowed us to do in our partnership with them is tell the stories of our players at those events for our audience,” Associate Athletic Director of Communications Brandon Langlois told The Dispatch. “Because let’s be honest, there’s so many guys at the combine; there’s so many schools represented. So it allows us to really get a deeper dive into those guys’ experience with us being there and seeing them.”

As for Brown, his work begins on a more meta-level: What’s the larger picture he’s trying to promote?

Thinking out ideas for animations he could put together, he settled on a cell phone, given both the actual call players receive from NFL coaches and general managers on draft night and the metaphorical achievement of reaching a lifelong dream.

Brown first built each piece of the design in Adobe Photoshop before exporting them to Adobe After Effects. There, he added motion to the cell phones — a task he conceded was outside his normal comfort level. The final product wove color palettes, logos and other tools passed on by the NFL to aid in MSU’s process.

In all, the graphic production takes a couple hours. It’s arduous to a degree, but Brown sees the larger impact of the work.

“A lot of people don’t really pay attention to that first step that kind of comes into the draft, and that’s that phone call from the coach in the program that’s going to change your life,” Brown said. “As soon as it vibrates or as soon as that phone rings, their life is going to change.”

‘A BIG STAGE’
As the draft weaved its way through its first attempt at an entirely virtual format over the weekend, Brown’s team stood by.

One by one, five former Bulldogs were selected throughout the three-day, seven-round event. The buzzing cell phone graphics designed by Brown and fleshed out by Bernardo’s video were personalized and released with each MSU player picked.

“This is a big stage for our players, and it’s a big stage for us,” Bernardo said. “And there’s more eyes than just Mississippi State fans watching our content. So we want to make sure it’s the best that we can do.”

All nine received their own Twitter shoutouts once confirmations were made.

Working late into the night Saturday and into Sunday, Brown and Bernardo’s next tasks have come into focus.

Brown has already begun designing football ticket assets for next season, whenever it may be.

The 2020 football poster is also in the works. Bernardo’s video clips will surely accompany a litany of other projects on the agenda, though things have been adjusted due to COVID-19 restrictions.

And while the 2020 NFL draft concluded less than 48 hours ago, preparations for the next slate of Bulldogs to receive their own life-changing phone calls have already begun.