Mississippi pastor ‘holy hopped’ to advance on ‘The Voice’ 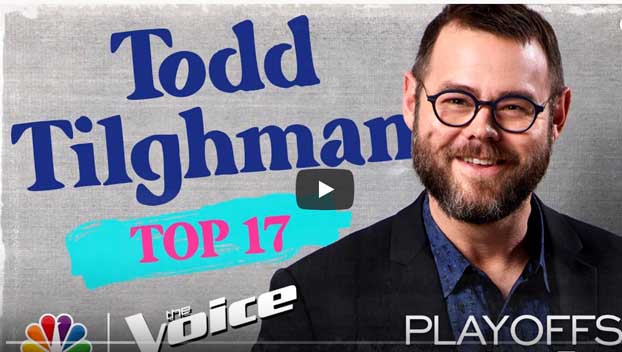 Pastor Todd Tilghman “holy hopped” his way to the finals during Tuesday night’s live episode of The Voice.

Anxiously awaiting with his family from his home in Meridian, Tilghman was the first contestant to be saved as host Carson Daly announced the winner with the most votes from Team Blake.

To proceed, the top 17 artists performed live from their respective homes Monday night for a spot in the Top 9. Tilghman performed his rendition of Peter Cetera’s “Glory of Love.”

Viewers were able to vote for their favorite performances. The one artist with the highest number of votes from each of the four teams were secured a spot in the Top 9.

Coach Blake Shelton commented that Tilghman was one of his favorite artists he has ever worked with since doing the show – saying he deserves to go all the way.

Tilghman wowed judges with his rendition of Bob Seger & The Silver Bullet Band’s “We’ve Got Tonight” during “The Voice” blind auditions back in February receiving the first four chair turn of season 18.

Tilghman chose Shelton as his coach, saying he was more like him as a person.

Clarkson likened Tilghman’s voice to the raspy sound of Chris Stapleton and Kenny Rogers, Shelton commented that he loved his passion and range. Shelton also said he had a great hop – the “holy hop.”

Tilghman, the 42-year-old father of eight, is the lead pastor of Cornerstone Church in Meridian, where he grew up, and is married to his high school sweetheart, Brooke.

The next episode of “The Voice” is at 7 p.m. on May 11 where the top 9 artists perform in front of coaches Kelly Clarkson, Nick Jonas, John Legend and Blake Shelton for their chance at a spot in the finale.