Dog missing for 54 days after EF4 tornado reunited with Tennessee family: ‘Missing piece to our family’ 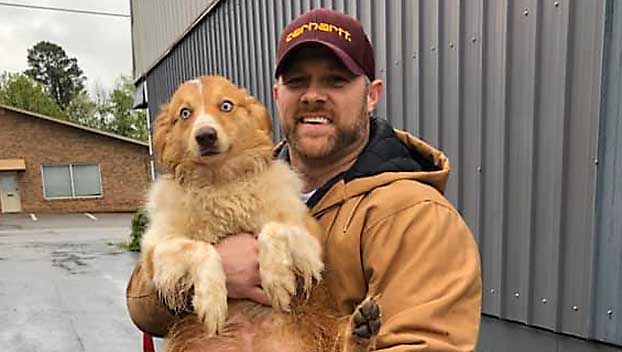 Eric Johnson holds Bella when they were reunited 54 days after an EF-4 tornado destroyed his family's home and separated them from their beloved dog. (Facebook / Eric Johnson)

More than 50 days after a devastating tornado outbreak battered middle Tennessee, the search for one family’s missing dog recently ended on a joyful note.

During the early-morning hours of March 3, an EF4 tornado caused widespread damage to the city of Cookeville. The home of Eric and Faith Johnson was among many homes that were completely leveled by the storm.

Bella, the couple’s Australian Shepherd, had last been seen helping to alert the family of the incoming storm, which prompted them to take shelter in the bathtub.

“My dog woke us up going completely insane and she never does that,” Eric Johnson said in a Facebook post.

One of the dogs, Scooter, was lying on top of the bed when Eric ran back to the bedroom to try to get both of them.

“I could feel the tornado ripping the house apart, and I screamed at him and he just left him and ran to us to try and save us,” Faith recalled.

Eric and Faith both took shelter in their bathtub with their 4-year-old and 18-month-old children as the tornado blasted through. The EF-4 tornado split the bathtub that they were sheltering in in half.

After the tornado had hit, Eric and Faith were both injured from the storm, and both of their dogs were missing, but they were comforted by the fact that their kids were OK.

Unfortunately, Scooter did not make it out alive.

But even though Bella was nowhere to be seen, the family knew that she was alive.

“By the time the tornado had left our house, all except three houses were completely leveled,” Faith said. Eric added that the tornado had ejected them 50 yards from their house when it struck.

Shortly after, Faith started hearing Bella barking somewhere around her, “I kept telling Eric, I hear Bella barking and I knew it was her bark but she just got lost in the chaos.”

The Johnsons put up a post on the Putnam County “Found in the Storm” Facebook group, a group dedicated to objects and animals lost and found in the storm-ravaged area.

Within the next couple of weeks, many neighbors and even the sheriff’s department had informed the family that they had spotted Bella, but nobody had been able to catch her yet.

“We had hope because immediately when I got out of the emergency room, I had a phone call that said ‘hey your dog is out here I see your dog running around the property still’ so I knew then she was alive and wasn’t injured,” Eric said.

Over a month later, a family friend from their church, Sarah Romeyn, alerted the couple that Bella had been spotted by an employee of an animal grooming business in the area.

Romeyn placed trail cameras on a fence in hopes to find Bella. Shortly thereafter, the cameras captured footage of Bella going between two buildings to eat food that had been left out for her.

Romeyn quickly called Eric and told him that she knew exactly where Bella was. Eric quickly came to the area with his brother-in-law and pastor to try to capture Bella.

“Bella trapped herself, there was a fence on one side that only I could get through and the other side was only 2 feet so I couldn’t fit through there,” said Eric.

After nearly two months, Eric successfully reclaimed Bella on April 26, and by that night, she was home resting comfortably with “a belly full of food.” Calling her the family’s “miracle dog,” he thanked Romeyn and numerous other volunteers who helped search for Bella.

“It’s wonderful to have her back,” Faith said. “My husband was so emotional when he called me … and said 100% if this is Bella we are gonna have her.”

Bella has been labeled a hero by the People for Ethical Treatment of Animals (PETA) as she was awarded with PETA’s Heroic Dog Award as well as a treat basket this past week, according to The Tennessean.

“She’s the missing piece to our family, and now she completes us again and things feel like they are starting to become normal again,” Faith said. “The house has been so quiet … I missed her barking. I don’t mind those barks, now she can bark as much as she wants,” she continued.

The Johnsons told AccuWeather’s Bill Waddell that they plan to rebuild their home in the same neighborhood, but this time they will build a storm shelter, Eric said.

With severe storms continuing to impact the southern United States this year, Faith offered advice to those who have been devastated by a tornado or are going through a similar situation.

“Keep your faith, don’t lose hope, a better day is around the corner, each day does get better…don’t let fear ruin your life,” she said.

Mississippi man killed when he tried to jump ditch…