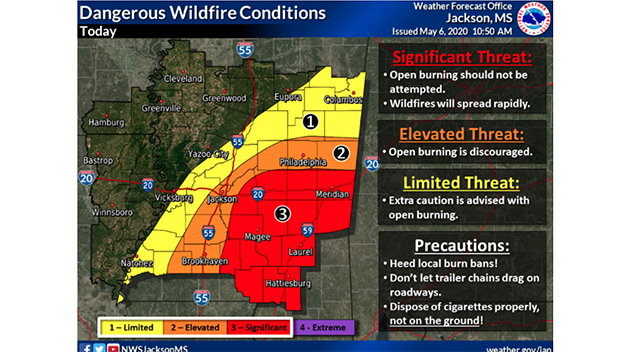 As firefighters on the Mississippi Gulf Coast fight a large wildfire in Hancock County, the National Weather Service said the risk of wildfires in the southeast corner of the state is high.

Areas east of Interstate 55 from Columbus to the Gulf Coast will see elevated risks of fires similar to the fire in Harrison County, which started on Tuesday.

Areas from Meridian south will see a significant threat of dangerous fire that, because of high winds, could spread rapidly. Open burning should not be attempted, the National Weather Service said Wednesday.

High wind conditions should continue through the evening Wednesday.

Smoke and debris trails from a Gulf Coast wildfire were large enough to be detected by radar Wednesday.

This #wildfire between Waveland and Pearlington is clearly visible on radar. The smoke is drifting due south over the marshes. #MSwx #LAwx @NWSNewOrleans pic.twitter.com/fGWDu7V4PO

The fire, which started on Tuesday, ignited again Wednesday.

Mississippi Forestry is cutting fire lines to ultimately suppress the 240-acre fire and got it under control. But sometime during Tuesday night, the blaze jumped the lines that were set in place.

Jason Scott, the director of information and outreach at the Mississippi Forestry Commission, said they expected to control the flames within a couple of hours, using their counter-fire technique, which would consume the fire’s fuel and cause it to burn out. It has yet to do so, but the crews are still working diligently to minimize the fire and smoke.

In addition, MSFC encourages Coast residents to refrain from burning outside.

Fire danger in the area is extremely high due to the lack of significant rain, high winds and low relative humidity, according to the Director of Information and Outreach at MSFC.