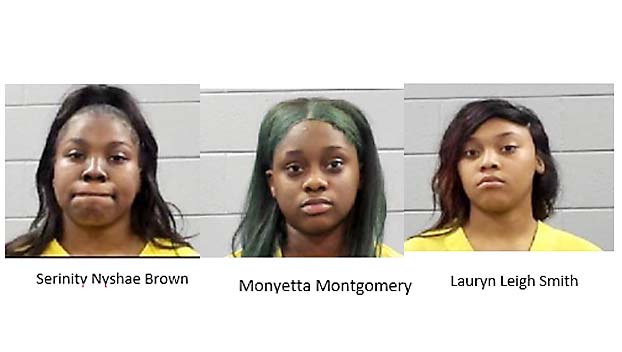 Armed with a kitchen knife and a can of insect repellent three teenage girls carjacked a Mississippi man, robbed him and tried to hit him with his own car, police report.

Brandon, Mississippi, police say that at approximately 12:21 a.m. Saturday, officers noticed a suspicious vehicle parked along the side of a road.

Soon after they spotted a man walking nearby who told police officers he had been robbed by three women who also stole his car.

The man told police the females tried to hit him with his car as he walked down the road. The suspects then abandoned the car and flattened two of its tires before leaving the scene, police said.

Around the same time, officers were dispatched to the area of Stoneybrooke Drive to investigate reports of people banging on doors of homes in that area. Officers were able to locate one adult female walking in between houses on Stoneybrooke Drive, and she admitted to being involved in the carjacking and robbery of the man earlier, along with two other females, police said.

The other two females were located walking near Louis Wilson and Deborah Drive, and they too admitted their part in a plot to lure the man to a residence in Brandon, hide in the bushes and jump out when he arrived, then rob him, police reported.

The suspects used a kitchen knife and a can of insect repellent as weapons during the carjacking. The victim was able to positively identify all three females as his assailants, and they were all taken into custody.

Two of the female suspects are juveniles charged as adults for these crimes.

All three suspects were booked and transported to the Rankin County Jail with a court date of May 13, 2020 in Brandon Municipal Court.

This investigation is ongoing; additional suspects and charges are possible.