Will people be willing to venture out as state reopens? Data suggests yes … but slowly 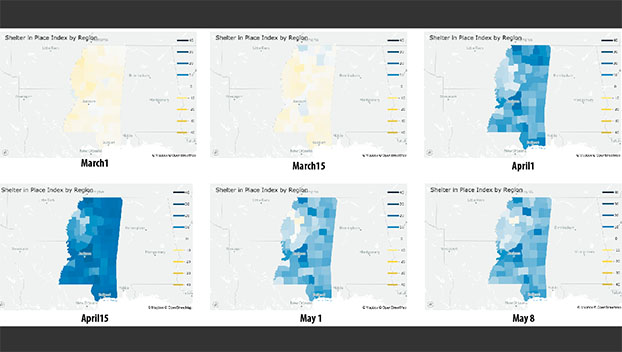 As the Mississippi economy slowly reopens, one question that remains is how willing people will be to shop, dine and visit the state’s restaurants and businesses.

One company reports that data suggests Mississippians are slowly easing back to normalcy when it comes to venturing away from their house, but that the level of activity in the state is not near what it was before the COVID-19 pandemic began.

The website SafeGraph has been publishing a COVID-19 Shelter-In-Place report card quantifying the percentage of residents staying in their home. The company has been using cellphone data to quantify its results between late February and May 8. The activity has been quantified by using a color-coding system. Lighter color show higher levels of activity. Darker blue colors show a reduction in activity and an increase in sheltering in place.

Two other websites that track data from mobile phones also demonstrated that from March 1 through May 8 the activity among Mississippi residents slowed down significantly in the latter part of March and into April when Reeves issued a stay-at-home order for the state.

A website by Descartes Labs color codes maps to show the level of activity in each county. The darker the color the higher the activity level.

Between late March and most of April, the maps from Descartes Labs paint the state in light shades of green and blue. Maps from early May slowly darken.

Since Reeves has issued new orders that begin to reopen the state’s economy, mobile phone data shows that activity has increased and that cellphone users have become more mobile in recent days.

In late March, as social distancing and stay-at-home orders were still relatively new, a survey found that Mississippi merited top marks for adhering to those policies.

Similarly, a website called Unacast also analyzes cellphone data to see how many people are interacting with each other each day.

They’ve assigned a score to each of the states. Back in late March, Mississippi earned a “B.”

As of May 7, however, the state earns a collective grade of “F.”

The Unacast scorecard measures the data in three categories:

In all three categories, the state received an “F” grade based on the most recent data available.

Currently, no state ranks higher than a “C+” in the overall score. Nevada earned a C+. Vermont earned a “C” and New Mexico and Montana earned a “C-” grade. Twenty-four states received an “F” grade.