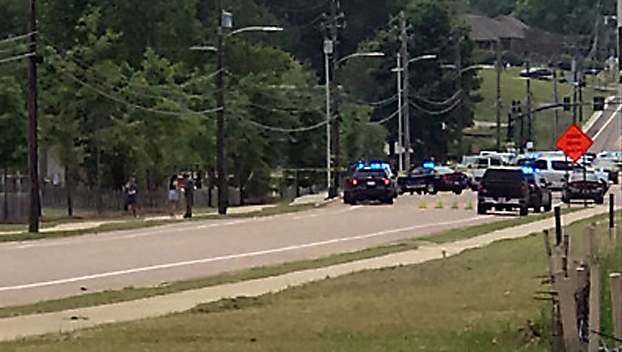 An Arkansas man wanted in connection with a murder was shot and killed in Oxford following a pursuit on Friday. The incidient occurred near the South Lamar Boulevard and Azalea Drive intersection. (Jake Thompson/Oxford Eagle)

A suspect in an Arkansas slaying was shot and killed by authorities Friday in Mississippi during a shootout in which a U.S. marshal was wounded, officials said.

Hunter Carlstrom, 33, was fatally shot by authorities after he began firing at deputies attempting to pull him over in Oxford, Mississippi, news outlets reported.

Mississippi Bureau of Investigation Capt. Johnny Poulos said marshals tried to stop Carlstrom on Friday morning, but he fled and later jumped out of the car and began shooting at authorities, hitting the marshal twice.

The wounded marshal was expected to recover, authorities said.

Carlstrom’s wife was with him during the confrontation and was taken into custody. It was not immediately clear whether she faces any charges.

Authorities in Lawrence County, Arkansas, said Carlstrom was wanted for the killing of James Sarotelli, 61, who was found dead on May 7 in Smithville, about 150 miles (241 kilometers) northwest of Oxford.