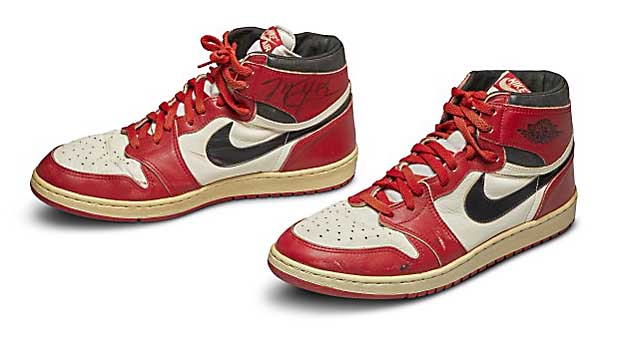 A pair of used sneakers just sold for more than half a million dollars. The catch? They were NBA great Michael Jordan’s shoes.

Sotheby’s announced that Michael Jordan’s game worn, autographed Nike Air Jordan 1s from 1985 sold for $560,000 Sunday in an online auction – the new world auction record for any pair of sneakers.

Following a bidding war which drove the value up by $300,000 within the final twenty minutes of the sale, the pair achieved more than 3.5x their $150,000 high estimate.

Bidders ranging from age 19 to 50+ participated across 4 continents, with 70% of bidders new to Sotheby’s. The pair was sold coinciding with the final episode of the popular ESPN documentary “The Last Dance,” spotlighting the Chicago Bulls and Michael Jordan’s legendary career.

“We are extremely excited about today’s record-breaking result,” said Brahm Wachter, Sotheby’s Director of eCommerce Development. “Building off the momentum from our debut sneaker sale last year, which previously set the record for a pair of sneakers with the Nike Moon Shoe, we wanted to set the bar even higher for our second sneaker sale.

“We saw tremendous bidding up until the moment the sale closed, with the value more than doubling in the final hour alone. That coupled with strong international bidding from six countries on four continents shows not only the incredible appeal of Michael Jordan as one of the most recognizable and legendary athletes of all time, but also that sneaker collecting is truly a global and growing market.”

The vintage originals from 1985 are in the Chicago Bulls white, black and red – the Air Jordan 1 colorway that Michael Jordan wore the most often on the court.

In 1984, Nike gave Jordan a signature line of shoes and clothes – a crucial, unprecedented move to entice Michael Jordan to sign with Nike. Produced between February to April 1985, Jordan wore the present pair of Air Jordan 1s during an early, pivotal point of his career and thus catapulted the sneaker’s popularity.

The Jordan exclusive features unique variations from the public release of the sneaker: MJ’s are Mids, whereas Nike released only Highs and Lows to the public in 1985; the iconic Swooshes are longer, leaner, and more aggressive; and the pair is made from a different material and features red laces, varying from the public offering with only black and white laces.

The right shoe features Michael Jordan’s signature in black permanent marker, unlike many of Jordan’s Game Worn Autographed shoes which are signed with a ball point pen that wears away over time. On offer in remarkable condition, the pair shows frequent wear in comparison to most of Michael Jordan’s other Game Worn Shoes, as he wore a new pair of shoes in every game later in his career. Beautifully creased, black and red and white slashes and markings on the uppers are presumably from the shoes knocking into each other or into the shoes of opponents while Jordan wore them to battle. Wearing mismatched shoes most of his career, the pair is in a size 13 (left shoe) and a 13.5 (right shoe).

The Latest: Coronavirus cases rise in Mississippi, but trailing…