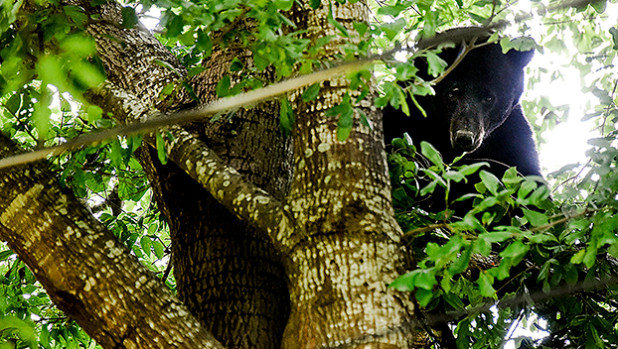 A black bear (and one of his friends) sparked the attention of a Mississippi neighborhood on Wednesday.

Natchez resident Robert Waldrop said he spotted a black bear sitting in a tree in his neighborhood in the northeast part of town near St. Catherine Creek.

Waldrop said one of his neighbors saw two bears at one time at approximately 2 a.m. on Wednesday.

One of the bears disappeared while the other climbed a tree behind a neighborhood house.

A game warden Mississippi Department of Wildlife, Fisheries and Parks stayed and watched the second bear sitting in the tree into the afternoon, Waldrop said.

“We don’t know where the other one went,” he said, adding he believed the bear could have wandered into the woods around St. Catherine Creek.

Jamie Holt, a black bear program biologist with the Mississippi Department of Wildlife, Fisheries and Parks, said Mississippi’s black bears are commonly seen in the Mississippi Delta region and have a tendency roam about in the early springtime looking for food sources, some of which can be found in residential areas.

“We have gotten two calls including this one over the last month and each sighting was about 7 miles from one or the other,” Holt said. “Neither had any noticeable tags or collars so I can’t be sure whether it was the same bear or not. … Bears cover a lot of ground this time of year eating vegetation. They’re not carnivorous but will get into dog food, cat food, trashcans and bird feeders. Food sources will attract them.”

If bears are a safe distance away, the best practice is to leave them alone, Holt said.

Holt said bears that get too close to houses can usually be scared away with loud noises like blowing car horns, shouting or banging objects together.

“If someone sees a bear, enjoy viewing it but only enjoy from a distance. It’s not every day you get to see one. As long as there is not an issue, leave them alone.”

To deter bears from coming into your yard, Holt said to clean up lock away any food sources or smells such as outside grills or trash bins.

“Placing a brick on top of the lid of a trashcan is not a good way to lock it up,” he said. “Bears are strong animals, so its better to keep trash locked away in a garage or shed and set out trashcans relatively close to when the garbage truck runs.”

Holt said bear sightings in Wilkinson, Franklin and Adams counties are fairly common and the neighboring state of Louisiana has a strong black bear population as well.

Just across the Louisiana state line from Natchez, Vidalia Police Chief Joey Merrill said the Vidalia Police Department received at least two calls where young black bears were spotted within the town limits in the area of Pine and Apple streets over the last couple of weeks.

“I used to be a wildlife agent myself and worked as a game warden before coming to the Vidalia Police Department,” Merrill said. “In my experiences with bears, this time of year is when the cubs get old enough to be away from their mother and venture out. Sometimes they get lost. … Bears are more scared of you than you are of them. If everyone will keep their distance and leave them alone they will usually move on.

People might want to avoid leaving any dog food out because that could attract them.”

Merrill responded to reports of black bear sightings in Louisiana with a social media post on Tuesday evening, which states that anyone who sees a bear or cub should not approach or harass them, keep a close eye on small pets and contact either the police department at 318-336-5254 or the Louisiana Department of Wildlife, Fisheries and Parks at 225-765-2800.

To report bear sightings in Mississippi, Holt said Wildlife and Fisheries could be reached at 601-432-2199 or a form could be filled out online at www.mdwfp.com/wildlife-hunting/black-bear-program, which helps Mississippi wildlife agents track locations where bears may have migrated.