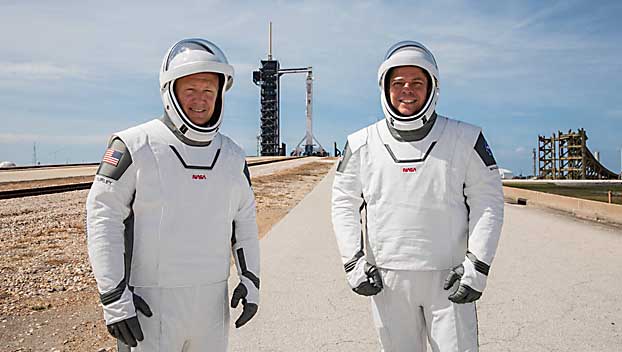 Despite more storms in the forecast, SpaceX pressed ahead Saturday in its historic attempt to launch astronauts into orbit for NASA, a first by a private company.

Forecasters put the odds of acceptable conditions at 50-50 for the 3:22 p.m. liftoff of a SpaceX Falcon 9 rocket — the first launch from the U.S. with NASA astronauts in nearly a decade.

SpaceX and NASA managers monitored the weather not just at Kennedy Space Center but all the way up the Eastern Seaboard and across the North Atlantic to Ireland. Waves and wind need to be within certain limits in case the SpaceX Dragon crew capsule, carrying Doug Hurley and Bob Behnken, has to make an emergency splashdown on the way to orbit.

Their destination is the International Space Station, a 19-hour flight away.

“The problem, of course, in Florida in May is there will be thunderstorms. So that’s true today as it probably will be every day in May and probably early June here,” NASA Administrator Jim Bridenstine told The Associated Press as the countdown clocks hit the 5-hour mark.

“We look like we’ve got about a 50-50 shot here and we’re going for it.”
Wednesday’s countdown was halted at just under 17 minutes because of the threat of lightning.

“Falcon/Dragon are designed to withstand multiple lightning strikes, but we don’t think it would be wise to take this risk,” tweeted Elon Musk, SpaceX’s chief executive and founder.

Hurley and Behnken noted Friday that they endured numerous delays on their space shuttle flights, for both technical and weather reasons.

Hurley said his first mission was postponed five times over the course of a month. His second mission was NASA’s final space shuttle flight in July 2011, the last time astronauts rocketed away from home soil.

Bridenstine said both astronauts have assured him they’re “ready to go.”

“I would be lying to you if I told you I wasn’t nervous,” Bridenstine told the AP. “We want to do everything we can to minimize the risk, minimize the uncertainty, so that Bob and Doug will be safe.”

And early Saturday morning, spectators began lining the Banana and Indian rivers in surrounding towns for front-row views. Signs along the main drag along the beaches urged “Godspeed.”

NASA tried to discourage spectators because of the coronavirus outbreak and severely limited the number of employees, visitors and journalists inside Kennedy Space Center. At the center’s newly reopened tourist stop, though, all 4,000 tickets for the launch were snapped up in a few hours.

NASA hired SpaceX and Boeing in 2014 to taxi astronauts to and from the space station, under contracts totaling $7 billion. Both companies launched their crew capsules last year with test dummies.

SpaceX’s Dragon aced all of its objectives, while Boeing’s Starliner capsule ended up in the wrong orbit and almost was destroyed because of multiple software errors.

As a result, the first Starliner flight carrying astronauts isn’t expected until next year.
NASA wants to ease its reliance on the Russian Space Agency, the only route for crews to the space station since the retirement of the space shuttles. It’s cost NASA billions of dollars for Russian Soyuz seats.