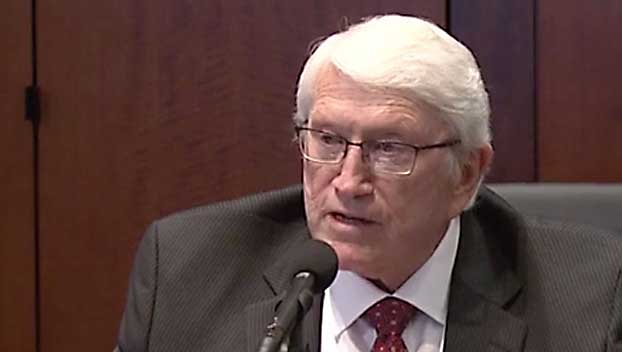 Before Gov. Tate Reeves announced on Wednesday that he had appointed Burl Cain, the 77-year-old former warden of the notorious Angola State Prison in Louisiana, as the commissioner of the Mississippi Department of Corrections, he’d been handed a list of three finalists.

Reeves appointed a seven-member committee in January to conduct a national search and help him pick the next prisons chief. In total, the committee received about 55 applications for the job, said Vicksburg Mayor George Flaggs, the chairman of the search committee.

The committee narrowed the applicant pool down to three finalists, including Cain, and sent the names to Reeves.

“Once we gave him the three finalists, we did not have any influence on the process,” Flaggs, a former chair of the state House Corrections Committee, told Mississippi Today this week. “But I stand behind the work of the committee and the governor’s prerogative to appoint whomever he wanted.”

Reeves’ selection of Cain to oversee the troubled Mississippi Department of Corrections was met with criticism by many this week. Cain, whose controversial corrections career has regularly garnered national headlines, resigned his post in Louisiana in 2015 after allegations that he misused public funds.

The Mississippi Department of Corrections has been plagued for years by scandal. The department received national attention in 2013 after the conviction and sentence of 20 years for then-Commissioner Chris Epps, who received bribes to award contracts to private vendors.

Earlier this year, the department faced national scrutiny for outbreaks of violence inside state prisons. Since Reeves was inaugurated in January, at least three dozen inmates have died in state custody.

“We cannot rush the critical job of finding a new commissioner for the Department of Corrections,” Reeves said when announcing the search committee in January, as the outbreak of violence inside the state’s prisons had spurred massive protests and lawsuits from national celebrities. “We must get this right for the people of Mississippi. I am turning to my fellow Mississippians to help me in this mission.”

Mississippi law requires that the prisons commissioner have a bachelor’s degree. Flaggs said about 50 of the 55 applicants met that qualification.

“I was surprised by the number of applicants, good applicants,” Flaggs said.

Based on the total points received from all committee members, five finalists were selected. One of the original five finalists dropped out during the process, Flaggs said, and the committee agreed to add one more candidate whose resume was lost for a time.

Those final five were interviewed virtually by the committee. Tindell, whom Reeves also announced as commissioner of Public Safety on Wednesday, conducted most of the questioning of the finalists.

The committee then voted again on a top three, and those three names were sent to Reeves. As chair, Flaggs said he did not participate in the final vote for the top three.

“I would not change anything about it,” Flaggs said. He said he did not know the governor’s selection for the post until he attended Wednesday’s news conference where Reeves announced Cain.

“I did not know who it was until I saw Burl Cain getting out of the car right before the announcement,” he said.

In 2017, a Louisiana legislative watchdog audit found that 10 corrections employees performed work on Cain’s private residence — and some apparently while being paid by the state. The audit also claimed that while warden of Angola, Cain received other free benefits such as free appliances and flat screen televisions (totaling $27,000) and lodging at Angola for his relatives.

Cain also was accused of conflicts of interest for some real estate deals. He received national attention because of claims he reduced violence and crime at Angola by, in part, incorporating his Christian philosophy into the prison. Others criticized him for enacting harsh punishments into a prison already notorious throughout the nation.

Flanked by Reeves in a press conference on Wednesday, Cain maintained he did nothing wrong in Louisiana and said that at the time of the audit, he had actually helped grow Angola’s revenue through a prison rodeo that had gained national attention.

“I think what is important is those allegations were unfounded,” Cain said on Wednesday. “There was no crime committed. What we have to do is avoid the hint of impropriety. We will continue to do that. I have done that throughout my career.”

For his part, Reeves downplayed the allegations and doubled down on his support for Cain this week.

Reeves continued: “I have absolute full confidence in Burl Cain’s ability to change the culture at the Department of Corrections. I have absolute confidence he will do so in a manner to make Mississippians proud. I have zero reservations about appointing him.”

Cain must be confirmed by the state Senate. Confirmation hearings typically occur near the end of a legislative session, which this year will most likely be in June.

Born in the USA! American made effort blasts astronauts…