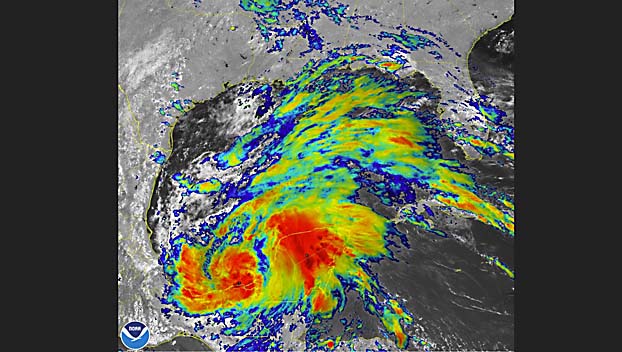 Tropical Storm Cristobal formed in the southern Gulf of Mexico on Tuesday, threatening to bring deadly flooding in parts of southern Mexico and Central America.

Cristobal was the earliest third named storm of an Atlantic hurricane season on record; in 2016, Tropical Storm Colin formed in the Gulf on June 5.

The U.S. National Hurricane Center said Cristobal was centered about 125 miles (200 kilometers) east-northeast of the oil city of Coatzacoalcos and was heading to the southwest at 3 mph (6 kph). It had maximum sustained winds of 40 mph (65 kph).

Forecasters said it is likely to wander just off Mexico’s Gulf coast during the week before veering northward across the Gulf as a strong tropical storm with winds of as much as 65 mph (105 kph). It is too early to say when and where it might strike the United States, but the projected path would send it toward the U.S. Gulf Coast over the weekend.

Dennis Feltgen, a spokesman for the National Hurricane Center, urged Gulf Coast residents to keep an eye on Cristobal, noting “there is no such thing as ‘just a tropical storm’.”

A tropical storm warning was in effect across the southern arc of the Gulf from Campeche to the port of Veracruz, though the biggest effect was likely to be rainfall accumulations of 10 to 20 inches (25 to 50 centimeters), and even more in isolated areas.

That poses a special risk to the Pacific coastal areas of southern Mexico, Guatemala and El Salvador, which were already drenched.

Cristobal formed from the remnants of the Eastern Pacific’s Tropical Storm Amanda, which killed at least 17 people as it moved across El Salvador and Guatemala over the weekend.

Because Amanda broke up after crossing over Guatemala and El Salvador into the Gulf, where Cristobal formed, it is not technically a “cross-over” storm that moved from the Pacific to the Atlantic, though that has occurred in the past.

But Amanda and Cristobal will soak some of the same areas, Feltgen noted.

“Unfortunately, the rain is falling in the same general area,” said Feltgen. “There are areas that will probably be measuring the rain in feet, not inches. … That is catastrophic.”