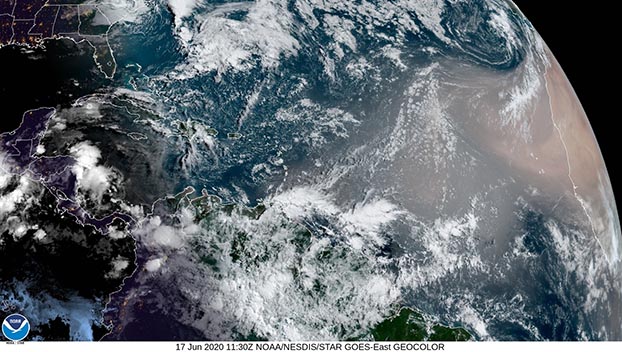 A large plume of dust from the Sahara Desert drifting westward over the Atlantic Ocean could reach states along the U.S. Gulf Coast by next week, creating vibrant sunsets, possible problems for people suffering with respiratory ailments and possibly fewer hurricanes and tropical storms for the region.

NASA Satellites have been tracking several plumes of tiny particles and dust moving across the Atlantic over the last couple of weeks and one plume is forecast to move over the Gulf of Mexico and into South Mississippi by the middle of next week.

During this weather phenomenon, tiny particles are carried by updrafts into an extremely dry and hot air mass known as the Saharan Air Layer, which forms above the desert between late spring and early fall. Strong winds frequently blow this dust-laden air layer—which extends between altitudes of 5,000 and 20,000 feet—westwards during this the summer, transporting dust thousands of miles.

The dust typically results in hazy, milky white skies during the day if clouds are not present. Sunsets can appear more vivid and redder when the view is not blocked by clouds.

The phenomenon can have an impact on air quality. However, by the time it gets to the Gulf Coast and South Mississippi, the dust is usually not in as high of a concentration to cause extreme issues. For people who are unusually sensitive to air pollutants, the dust can make breathing difficult. This includes those with lung and heart disease and COPD.

The National Weather Service said the plume of dust could result in a quieter hurricane season — at least early in the season.  Officials say the dry air associated the dust can create downdrafts  around tropical storms and hurricanes, which may result in the weakening of tropical cyclones. Strong winds associated with the SAL can contribute to increased vertical wind shear – the change in wind speed with height – which makes the environment hostile for tropical cyclone development.

The early part of hurricane season is typically quiet in the tropical Atlantic. But this outbreak of dust along with unfavorable upper-level winds will likely put a lid on any significant tropical development in the near-term future, weather officials say.

What is vitamin D and how does it work…