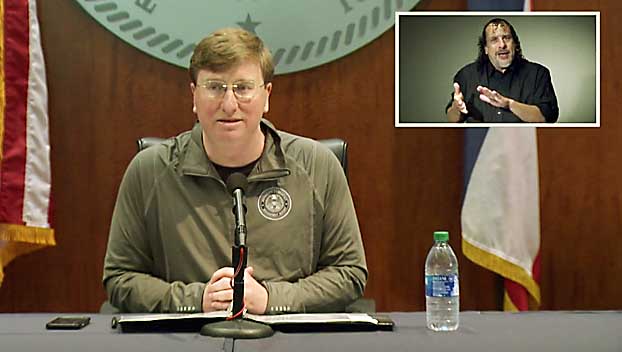 Mississippi Gov. Tate Reeves said Thursday that because of the coronavirus pandemic, he should have worn a mask during a funeral a day earlier where hundreds of law enforcement officers gathered to honor a Simpson County deputy sheriff killed in the line of duty.

“I did have a mask. It was in my pocket. I should have put it on,” Reeves said during a news conference.

He was responding to reporters’ questions about why he didn’t cover his mouth and nose while standing next to the family of James Blair during Blair’s funeral in Mendenhall. Public health officials have said for months that masks and social distancing are important ways to try to slow the spread of the highly contagious virus.

Blair, 77, was shot and killed Friday while taking a man to a mental health facility. Blair had worked in public safety more than 50 years.

Reeves said emotions were “very, very high” at the service, and he was focused on supporting Blair’s family and law enforcement officers.

“If y’all want to shame me for the way in which I handled it — go for it. That’s part of your job,” Reeves told reporters. “But I will not apologize for attending this funeral for this slain law enforcement officer.”

Reeves said he will always attend services honoring officers who are killed in the line of duty.

“Some of us are in jobs where we have to take additional risks,” Reeves said. “It’s not perfect, it’s not an ideal scenario, but it is what it is.”

During briefings in recent weeks, Reeves has told people to avoid large gatherings, including funerals.

On Thursday, Reeves and the state health officer, Dr. Thomas Dobbs, warned about community transmission of the virus through large social gatherings and encouraged people to wear masks. They encouraged people to follow Reeves’s executive order that bans more than 20 people from gathering indoors and limits gatherings to 50 people if social distancing is possible.

Reeves said his executive orders have the “full effect and force of law” and “it is a combined effort by local and state law enforcement officers to enforce those laws.”

Dobbs said Thursday that officials have identified a cluster of “significant” coronavirus outbreaks among college-aged people in Oxford, home to the University of Mississippi. He said the major sources of the outbreaks have been summer fraternity rush parties where 81% of the attendees are between 18 and 24.

“We are seeing this younger generation of cases coming through the system, and inevitably, it’s going to work its way up the system, and then the parents, because we’re already seeing parents who got it from their kids around this Oxford situation,” Dobbs said. “And then it’s going to go to the grandparents, and we’re going to have severe hospitalizations and illness and deaths.”

Dobbs said he is “extremely concerned” that the virus caseload will not decrease significantly by the fall, when there could be another surge.

“The summer has been worse than we anticipated in large measure because the anticipated adherence with social distancing has been overwhelmingly disappointing,” he said.

Mississippi has a population of about 3 million. Dobbs said Thursday that the state has had at least 21,022 cases of the virus and at least 943 deaths from it as of Wednesday evening. That is an increase of 381 cases and five deaths from the previous day.

For most people, the coronavirus causes mild or moderate symptoms that clear up within weeks. For others, especially older adults and people with existing health problems, it can cause severe symptoms and be fatal.

SEC may bar championship events in Mississippi until flag…