Man drives truck through church, tells police ‘you’ll find out’ why he did it 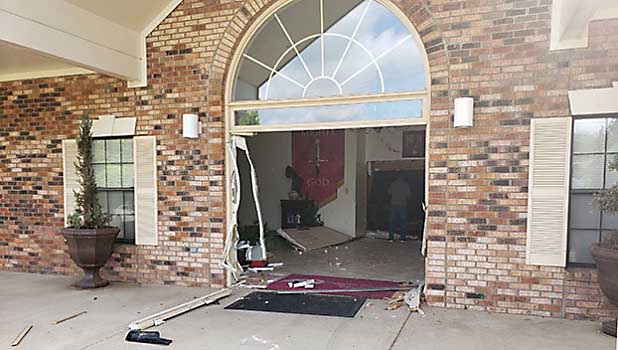 On Father’s Day Sunday, church members of Pilgrim Baptist Church on Pilgrim Boulevard arrived for Sunday morning worship services to find out a truck had backed into the church through the front doors.

Natchez Police Chief Walter Armstrong said officers had detained Oliver Moore, who was still at the scene of the incident when officers arrived standing next to a white pickup truck, engine on and the keys in his pocket.

“He didn’t say why he did it but other than that (Moore) was very compliant,” Armstrong said. “When asked why he did it, he said ‘You’ll find out.’”

Church members waited around the church for investigators to clear the scene before walking up to assess the damage.

“I don’t know what happened, I just know that it is very disappointing that it happened on a Sunday morning right before we were about to have church service,” said Flora Terrell, a long-time member of Pilgrim Baptist. “… I’m grateful that (the damage) wasn’t worse.”

Michael Winn Sr., who is a church deacon, said he was upset to come to church on father’s day to find the wreckage and would pray for the man that did it.

“Whoever did this needs a lot of help,” he said. “Really as sad as it is, as bad as it is we still got to pray for him because it’s obvious that he was not himself. … It hurts, especially on a day like this father’s day. … God’s word says he’ll make all things work for the good of those who love God and are called according to his purpose. So in the midst of such a disaster here I know good will still come of it.”