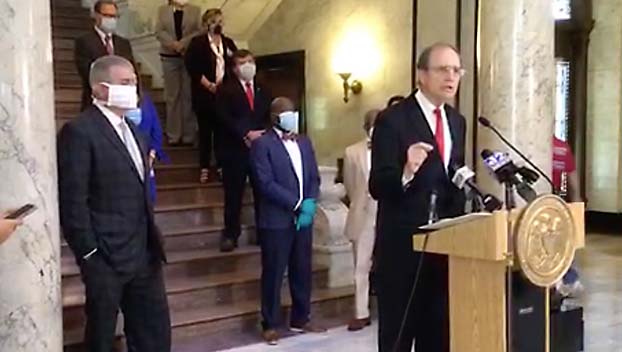 Mississippi’s lieutenant governor said Wednesday that lawmakers — not voters — should change the state’s controversial flag which contains a Confederate emblem.

Lt. Gov. Delbert Hosemann said that his decision wasn’t based on economic losses or other pressure coming as outside entities announce bans on doing business with Mississippi until the flag changes.

“While important, these issues are not controlling,” Hosemann said in a written release. “What is compelling to me is the future of our children and grandchildren. They will learn together, they will work together, and they will worship together.

“Those who wish to fly our flag should not be typecast in any fashion. Similarly, those who are offended by our flag are sincere in their beliefs. The physical acknowledgements of our history are our guideposts and buoys which helps us to avoid reefs in the future. Destruction of history fails to change it and, over time, opens us to repeat it.”

Hosemann said he favored changing the flag’s design and said the “majority” of Mississippians did as well.

“In my mind, our flag should bear the Seal of the Great State of Mississippi and state ‘In God We Trust,'” he said. “I am open to bringing all citizens together to determine a banner for our future.

“Some distrust the will of the citizens and fear the public dialogue which comes with a ballot,” he said. “I am not one of those people. Changes in our hearts and minds arise from conversation, and in our Republic by the finality of the ballot box.