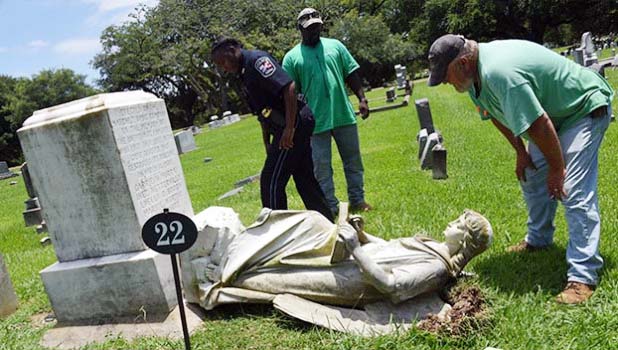 Police say they have suspect in historic cemetery vandalism

Investigators have developed a potential suspect in the case of the Turning Angel being knocked off its pedestal Tuesday in the Natchez City Cemetery, law enforcement officials said.

“Our investigation has taken us into another county for answers and a possible suspect,” said Walter Armstrong, Natchez police chief. “We have not located him yet, but it is an ongoing and active investigation, and we feel reasonably comfortable that an arrest could be forthcoming based on leads that we are running down at the moment.”

Armstrong declined to name the potential suspect or to comment on any potential evidence that might link the possible suspect to the case or on any suspected motive.

Armstrong did not say in what county the suspect is located but did say investigators traveled to that county on Wednesday and talked to people who know the suspect.

“I strongly suspect we will be able to release more information about him but until we develop the case a little bit further we are not ready to release any names,” Armstrong said. “… We have spent a lot of time on this case already, and we are going to spend even more time but to say why, speak to the motive, we are not there yet.”

Natchez City Cemetery workers said the Turning Angel statue was discovered lying on the ground behind its pedestal when they returned to the cemetery after lunch at approximately 12:30 p.m. Tuesday. Workers said the angel had been in place earlier in the day.

The Turning Angel is a landmark of Natchez and has been in its spot in the Natchez City Cemetery since it was placed there by the owner of the Natchez Drug Company to commemorate the lives of five girls who died in the building when it exploded in 1908.

The angel statue was dubbed the Turning Angel because it appears to turn at night as cars drive past it along Cemetery Road. The statue was further made famous when New York Times best-selling author and Natchez resident Greg Iles titled a 2005 novel “The Turning Angel” and featured a picture of the statue on the book’s cover.

Natchez City Cemetery Board President Elise Rushing said board members are still in the process of trying to choose a monument restoration company to repair the statue and have set up an account for donations.

“A lot of people are interested in helping,” Rushing said. “People suggested a Go Fund Me account, but right now contributions will be accepted through the mail.”

University coaches and Christian ministers filled the Mississippi Capitol on Thursday, urging legislators to seize the moment and remove the... read more