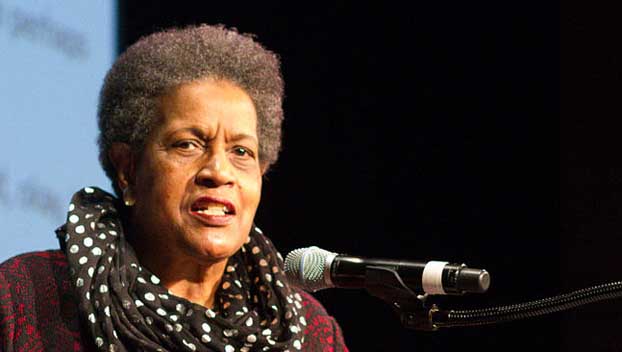 Myrlie Evers began to weep when she heard the Mississippi Legislature voted to remove the Confederate battle emblem from the state flag.

“I can’t believe it. I am so emotional,” the widow of slain civil rights leader Medgar Evers said. “Medgar’s wings must be clapping.”

On Sunday, the Mississippi House and Senate voted to replace the current state flag, a day after they voted to suspend the rules in order to bring up the new legislation.

If Gov. Tate Reeves signs the bill as expected, Mississippi would cease being the remaining state in the nation with the Confederate battle flag as a part of its state flag.

Under the legislation, a nine-person commission would be appointed to adopt a new design for the state flag. That design must include the phrase, “In God We Trust,” but it can’t include the Confederate battle emblem.

If voters in November reject the new design, the commission would present a different option to the Legislature in 2021.

A recent poll found that 55% of Mississippians wanted to change the current flag. That number jumped to 72% when the flag incorporated the motto, “In God We Trust.”

Both House Speaker Philip Gunn and Lt. Gov. Delbert Hosemann championed passage of the bill in the Republican-controlled Legislature.
State Sen. Robert Johnson, D-Natchez, said the passage of the bill has taught the state a lesson. “We’re white. We’re black,” he said. “We’re from the Delta. We’re from the hills. We’re from the coast. We are one Mississippi moving forward.”
State Sen. Briggs Hopson, R-Vicksburg, acknowledged that the Legislature has “punted this ball away in the past … Right now, in this great state in which we live, on this day, we have an opportunity to push this ball across the goal line.”

Myrlie Evers praised the courage of lawmakers. “I never thought this would happen,” she said. “For the people who hold the palm of Mississippi in their hands, for their wisdom and their strength, for them to vote the way they did is all but unbelievable to me, but I am ever so thankful for that vote.”

Mississippi has flown the current state flag since 1894 — four years after the state adopted a new constitution aimed at reasserting white supremacy and disenfranchising African Americans.

Other Southern states followed Mississippi’s lead, and soon African Americans across the South were barred from voting.

Myrlie Evers was born in 1933 in Vicksburg, the last major Confederate stronghold along the Mississippi River before Confederate soldiers surrendered to Union forces on July 4, 1863.

Growing up there, the Mississippi flag symbolized “slavery and second-class citizenship for those whose color was not white,” she said.

She is nearing 90 years of age, she said, “and I have carried the burden of my skin to what it represented to Caucasians and remember what my forefathers fought for — education and land ownership.”

Her late husband, Medgar, “gave his life for his country,” she said. “He fought in Europe as a second-class soldier, fighting for a country that did not appreciate him. His life was taken June 12, 1963, because of those same freedoms.”

She worries that the hard work of those in the civil rights movement has been forgotten.

“We’re moving into more turbulent times because of the leadership in this country,” she said.

After watching the news, she said she sometimes finds herself in anger and despair.

“I feel my heart being ripped in shreds,” she said. “I hurt that deeply for what’s going on in America today.”

The deaths of George Floyd and other African Americans captured on video and shown on television have resurrected nightmares of the night when her husband was shot in the back in their driveway outside their Jackson, Mississippi, home.

When she heard the gunshot, she ran outside, saw her husband in a pool of blood and screamed. He died an hour later at the hospital.

“America is at a crossroads,” she said, just as it was six decades ago during the civil rights movement.

She continues to pray for God’s help for the nation, she said. “I’m frightened, and I just hope people of goodwill will come together and vote for what they know is right and what is just and what is good for all of us, regardless of race, creed or color.”

She regards hatred as poison. “It poisons us as individuals,” she said. “I don’t want that poison flowing through my veins anymore.”

What Mississippi has done should inspire the nation, she said. “If Mississippi can make a move like this, I hope the rest of America can look at themselves and their states and see their signs of prejudice, hate and racism and perhaps be brave enough to remove them.”