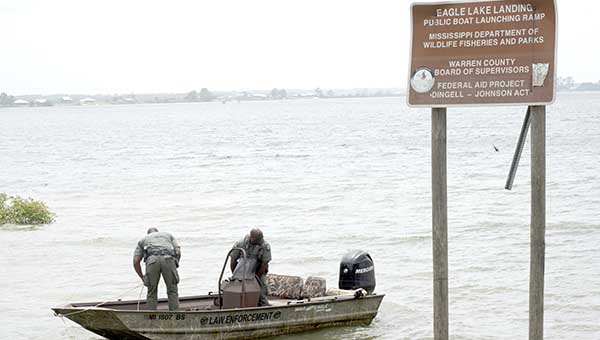 Mississippi Department of Wildlife Fisheries and Parks personnel deploy a boat into Eagle Lake to assist in a search for a couple who is presumed missing in Vicksburg, Miss., Tuesday, Jun 30, 2020. (Courtland Wells/The Vicksburg Post)

A birthday boat ride turned to tragedy with the deaths of a Mississippi couple on the lake where they own a vacation home.

Both drowned, he told The Associated Press.

He said the Renos, who owned a vacation home at Eagle Lake, were reported missing Tuesday morning after relatives realized they had not returned from Monday’s boat ride.

Their undamaged pontoon boat and James Reno’s body were found about 4 1/2 hours apart on Tuesday, and Debra Reno’s body was found Wednesday.

Their cell phones and other personal items were on the boat, WLBT-TV reported.

Debra Reno’s body was not far from the spot where her husband’s was found, Pace told the Vicksburg Post.

Eagle Lake is an oxbow lake on the Mississippi-Louisiana state line about 20 miles north of Vicksburg. It’s about 35 miles but nearly an hour’s drive from Raymond.

Mississippi governor: COVID-19, ‘not a hoax’ but says virus ‘an imminent threat to all of us’

As the total number of Mississippi residents being treated for COVID-19 continued to climb this week, Gov. Tate Reeves begged... read more