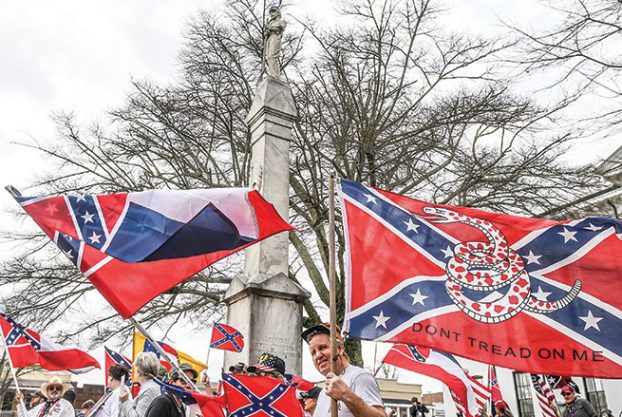 It was prayer that led Jason Whitfield to the beach 18 years ago, and prayer that led him to stay there for 77 days, sleeping on the sand and vowing not to leave until the Confederate battle flag waving high above him had come down.

His protest did not immediately bring change. The flags were briefly taken down as a tropical storm approached, and Whitfield went home. Then the flags returned, until Hurricane Katrina, and Whitfield did not.

But on Sunday, almost 20 years later, the Legislature voted to retire the state flag with the Confederate battle emblem he said was “tainted by hatred and racism.”

Jason Whitfield had been vindicated.

The next day, Jason Whitfield packed a cooler with bottled water and left his parents’ home in Gulfport without saying where he was going. He spent the day on the beach beside the display, praying. His parents found him as the sun was setting.

“We asked him about missing work and school, but he just repeated, ‘I’m not leaving until the flag comes down,’” his father Tommie Whitfield told The Times-Picayune at the time. “So we decided we better get him something to eat and a sleeping bag.”

A few days later, Ashley Whitfield — then his girlfriend of nine months, now his wife — joined him. Together, they stayed on the beach almost without interruption until late September. Jason’s explanation for the protest was simple: flying the battle flag was wrong, morally and historically.

On June 26, the day before the Legislature all but guaranteed the flag with the Confederate emblem would change, the couple returned to the site of their protest. With them were their three children, Marley, 16, Isaac, 14, and Naomi, 7. The Whitfields looked ahead to the moment the flag would finally come down, and back to the time they had spent on the beach, imagining what is now reality.

Every morning during that stretch from July to September, they set up a tent for shade, and every evening they took it down, to comply with the law against camping on the beach. It was hot, humid, and finding a place to use the bathroom could be complicated.

Family members and supporters visited every day, and the NAACP held a rally that drew 500 people. Donors provided food and water, and people came to pray together on the beach.

They also drew opponents. The six-foot wall that supported the flagpoles became known as the “Berlin Wall,” because Whitfield and supporters stayed on the west side, while counter-demonstrators gathered on the east. A white supremacist group led by David Duke held a rally and gloated when the Board of Supervisors reaffirmed their commitment to flying the flag.

“I haven’t been praying for them quite hard enough,” Whitfield said at the time, referring to the people who jeered and cursed at him.

His protest drew media attention, too. Local outlets visited regularly, and the Associated Press and Los Angeles Times ran stories. Sometimes Jason did as many as 15 interviews a day.

“In the middle of an interview, someone would drive by and yell, “N—– I hope you die!’” Jason recalled. “That just gave light to what was really going on, and the hate involved.”

Twice, people released snakes onto the beach where the Whitfields stayed. People called the Sun Herald to claim Jason was a pawn of Rip Daniels, the local radio host who has long been an outspoken critic of public displays of the Confederate battle emblem.

Through it all, Jason Whitfield remained stoic and steadfast in his conviction that the flag was simply wrong. He drew comparisons to Gandhi and Jesus. He reflected on the natural forces that shaped his every moment on the beach.

On the 77th day, Tropical Storm Isidore was threatening the Coast. The flags were removed to protect them from damage, and the Whitfields went home. Jason had always said he would leave when the flags went down.

When the flags went back up, he didn’t return, explaining that he had prayed and concluded his protest had run its course. Not long after leaving the beach, he came down with mumps.

Some saw Whitfield’s departure as a broken promise.

“In the end, the frailty of will and the flesh were more corrosive against the power of his promise, and he removed himself with less than a sufficient explanation for his change of heart,” the Sun Herald editor wrote at the time, which Whitfield still remembers. “When Jason Whitfield recalls this summer of his personal protest he can remember the cause with some pride and wonder what the 78th day might have brought. Alas, we will never know.”

The protest continued to shape the Whitfields’ lives long after they left the beach. To Ashley, the beach was where they fell in love.

“It was something to bond over,” Ashley said. “It showed me we both have a heart for community.”

Jason delayed his senior year at Alcorn State University to stay on the beach. He planned to finish his degree in business administration, but within a few years he and Ashley were expecting their first child, daughter Marley, and he didn’t go back to school.

The Whitfields moved to Atlanta, where Marley grew up hearing vaguely about her parents’ protest.

“It was a cool thing my dad did more than anything else,” she said.

Living in Georgia, Marley didn’t have to think about what it meant to have the Confederate battle emblem on her state flag. (Until 2001, the emblem occupied two-thirds of Georgia’s state flag. The design that replaced it is based on the Stars and Bars of the Confederacy.)

Two years ago, the family decided to move back to Mississippi. Jason wanted to go home, to get involved in the community that raised him.

To Ashley, the flag represented all of the things that made life difficult in Mississippi: the lack of opportunities, the racial oppression. When she saw it flying outside a business, she thought, They don’t like Black people.

The prospect of a new flag symbolizes the possibilities that the Whitfields and so many others have spent decades fighting for.

“So many people, my grandmother, my mother, had a vision of a different Mississippi for so long, and this feels like a step in the right direction,” Jason Whitfield said. “That’s kind of what it feels like, a better vision for our future.”

Today, the site of the protest looks like any other spot on the miles-long strip of sand running parallel to highway 90, except for the red hut offering jet ski rentals. Katrina destroyed the eight-flags display completely. Jason Whitfield said the way the beach looks now is the way it appeared in his prayers in 2002: serene and natural.

There is not even a flag pole. When Gov. Tate Reeves signs legislation to formally retire the 1894 flag, nothing will visibly change on the beach.

The Whitfields now drive by the beach several times a week. For Jason, it’s “like passing a house you used to live in.” It has spiritual significance, too, as the place where they lived with God and the elements and community, where they imagined a different world.

On Sunday, it became clear that their vision was not a broken promise, but a dream deferred.