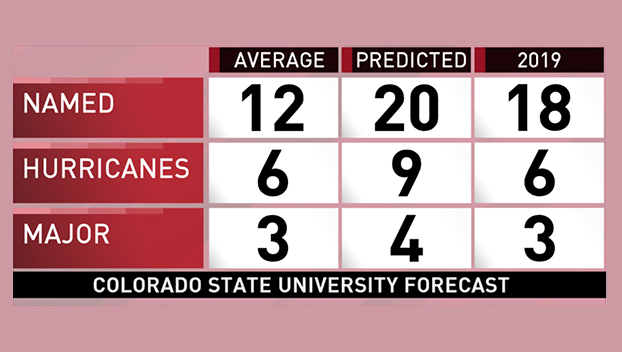 “Sea surface temperatures averaged across most of the tropical Atlantic and subtropical Atlantic are somewhat above normal,” the July 7 report states. “We anticipate an above-normal probability for major hurricanes making landfall along the continental United States coastline and in the Caribbean.”

In 2018, 18 tropical storms formed in the Atlantic. Six of the storms grew into hurricanes — 3 of them major hurricanes.

This year researchers predict 20 storms and 9 hurricanes for the region, which has already seen 5 named tropical systems.

The tropics have been relatively quiet for the past few weeks.

“As is the case with all hurricane seasons, coastal residents are reminded that it only takes one hurricane making landfall to make it an active season for them,” the report states. “They should prepare the same for every season, regardless of how much activity is predicted.”

Hurricane season runs until November 30, and the next name on the list is Fay.

Mississippi man arrested for threats against supervisor after posting…