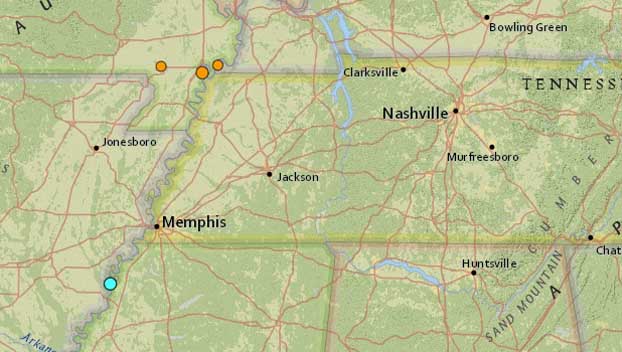 The blue-green dot shows the location of the earthquake recorded outside Tunica, Mississippi, while the three orange dots indicate earthquakes recorded near New Madrid, Missouri.

The United State Geological Survey reporting shows the earthquake was approximately 2.3 on the Richter Scale and was located approximately 10 miles below the surface of the southwest corner of Tunica Lake along the Mississippi River.

The quake was so weak no shaking was likely perceived by anyone on the surface.

It was a second earthquake detected in Mississippi this year. Another weak quake, this one a 2.1, was detected on Feb. 29 near Booneville, Mississippi.

Monday’s quake was along the New Madrid Fault which runs along the Tennessee line between Arkansas and Missouri. Typically earthquakes along the fault are quite weak, though a devastatingly powerful series of earthquakes hit the area in late 1811 and early 1812. That series of quakes was centered north of Memphis, but caused damage into south into Mississippi.

The New Madrid Fault has been subject of rumor, fear and conjecture for decades with some scientists suggesting the fault is virtually dormant, thus poses little risk, while others suggest a big earthquake could be on the horizon.