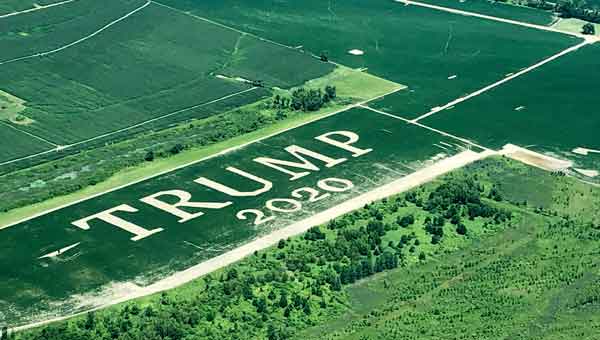 If Air Force One happens to fly across east central Louisiana this summer, President Donald Trump might see something that would make him give his signature thumbs up.

From the highway, Darrell and Donnie VandeVen’s land looks like every other soybean field in Tensas Parish. But from 20,000 feet in the air, one of their fields just a few miles southwest of St. Joseph, Louisiana, looks less like a field and more like a giant Trump 2020 banner.

Darrell and Donnie are second-generation Louisiana farmers, taking over for their father when he retired in 2001. They farm about 6,000 acres near St. Joseph.

With the help of Noble Guedon, the Integrated Solutions Department Manager for Goldman Equipment in Natchez, Mississippi, the VandeVen brothers used the latest farming technology to create the logo in a 30-acre soybean field.

“We talked about doing some sort of design,” Donnie VandeVen said. “We decided it’s an election year, we can do Trump 2020.”

Donnie VandeVen said he and his brother contacted Guedon to help make it happen. The VandeVens have used Goldman Equipment for their data management needs for many years.

Using GPS technology and satellite imagery, Guedon was able to help the VandeVen brothers take the design they created on a piece of paper and transform into a 1,500 foot-wide banner with 350-foot high letters.

“They sent me the logo of what they wanted to do, and we digitally overlaid it on top of a satellite image of their field,” Guedon.

In the past three or four years, farming technology has allowed farmers to pinpoint where seeds are planted in the field. Doing so, reduces waste and allows farmers to be very efficient with seed placement and herbicide placement, Guedon said.

A piece of equipment, called a planter, is hooked to a tractor and plants the seed using GPS technology.

In the past, farmers would have had to take a map to the field and then take a lawnmower and physically kill the crop to create a similar design in the field, Noble said.

“There is no way in the world the farmers would have gone out there and mowed down 5 or 6 acres with a lawnmower to create the Trump design,” Guedon said.

Donnie VandeVen said many people who have seen aerial images of the field have assumed that he and his brother went in and cut the image into the field.

Once the soybeans started growing and the logo emerged in the landscape, images of the banner started going viral on social media and have been shared thousands of times on Twitter and on Facebook.

“The reaction has been unbelievable,” Donnie VandeVen said. “The feedback has been overwhelmingly positive.”

Donnie Vandeven said he believes President Trump has seen an image of the field thanks to Luke Letlow who is running as a Republican for Louisiana’s 5th Congressional District seat.

“He assured me that the president and vice president have seen it,” Donnie VandeVen said.

Guedon said he knew the image was going to get some attention, just maybe not at the magnitude he has witnessed.

“You can see it from 20,000 feet or higher. When you are flying across country it sticks out like a sore thumb,” Guedon said. “We have some satellite imagery of it. You can even see the Trump 2020 sign from outer space.”

Guedon said he was glad to assist the VandeVens with their project.

“It was their concept and their idea. I think it worked out well,” Guedon said. “I appreciate them asking us to be involved and helping them implement the concept. I was just honored and proud to be a part of it.”