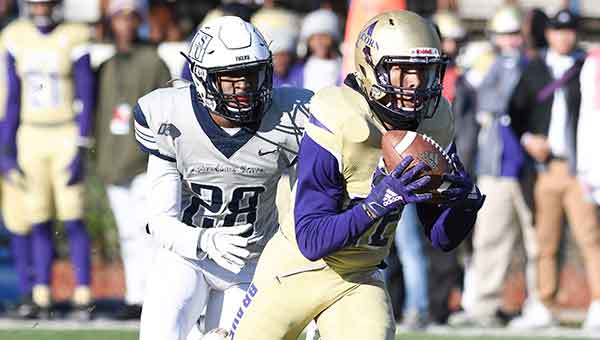 The Southwestern Athletic Conference will not play football in 2020.

The league announced Monday that it will postpone competition in all of its fall sports — football, cross country, volleyball and women’s soccer — until the spring semester because of a recent spike in COVID-19 cases nationwide.

The league made the announcement after a virtual meeting and vote of its Council of Presidents and Chancellors late Monday afternoon.

“The SWAC Council of Presidents and Chancellors felt this action was necessary out of growing concern for the health, safety and well-being both mentally and physically of our student-athletes, coaches, administrators, team staff, campus faculty, fans and supporters,” the league said in a statement.

Plans for restarting and rescheduling games in volleyball, soccer and cross country will be released at a later date, the SWAC said.

For football, teams will have an eight-week training period beginning in January 2021. They will then play a seven-game schedule, with four games against divisional opponents, two against teams from the opposite division, and the option to play one non-conference game.

The exact dates for when the training period and games will begin have not yet been set.

The SWAC is the fifth of the 13 Football Championship Subdivision conferences — along with the Ivy, Patriot, Mid-Eastern and Colonial — to postpone its 2020 football season. The SWAC, however, is the only one of those leagues to announce a restart plan.

There also have been no final decisions made regarding schedules for the league’s winter and spring sports. It seems likely, however, that the first half of basketball season, which begins in November, will be affected.

Student-athletes will still be allowed to attend classes, and teams can conduct practices and workouts during the fall semester, provided all required local, state, and federal health and safety guidelines are met.

The decision will be costly for some SWAC members. Alcorn State was to be paid $475,000 for playing its football season opener at the Southeastern Conference’s Auburn on Sept. 5. Alabama A&M was scheduled to travel to SEC foe Mississippi State on Nov. 21.

Alcorn had also had one home game, on Sept. 12 against Fort Valley State, canceled because the Southern Intercollegiate Athletic Conference canceled its season. Other schools, including Jackson State, had lost games when conferences around the country reached similar decisions.

“The rapid escalation of COVID-19 cases around the country heavily influenced the decision, as well as data that suggests that the African-American and other minority communities are being disproportionately affected,” Alcorn State director of athletics Derek Horne said in a statement. “Decisions of this magnitude are made in the best interest of the health and safety of everyone involved.”

Although several championships have been vacated because of rules violations, this will mark the first time since 1943 that the SWAC will not crown a football champion, but it could conceivably award two trophies in 2021. The 1943 championship was not awarded because of World War II.

“Jackson State University fully supports this decision as the health, wellness, and safety of our student-athletes remains our priority,” Hudson said.