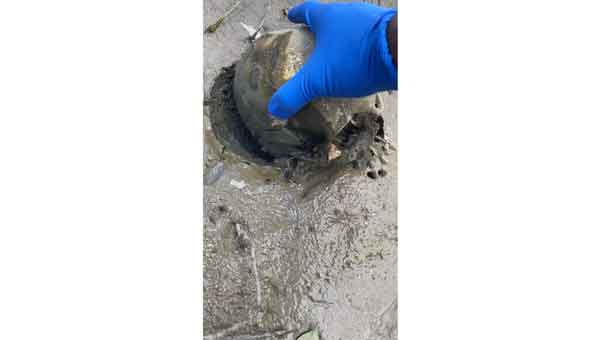 This human skull was recovered In July along the Mississippi River bank in an area of Adams County, known as Anna’s Bottom. (Submitted Photo)

Lee said his office was notified Thursday that the skull was discovered sitting on the river bank at an area known as Anna’s Bottom, which is the same vicinity where Lee recovered a boot with what appeared to be human remains July 6.

“At this point in the investigation we are not sure if the two findings are connected,” Lee said. “The remains from July 6 have been submitted to the state crime lab for analysis but the case is still pending.”

Lee said the skull also would be transported to the state crime lab for forensic analysis.

Lee said he has met with members of a family who are missing a loved one who was wearing boots similar to the one found July 6. The family members have submitted DNA samples to determine whether the remains belong to their family member but the results are still pending.

“I am sorry that someone lost their life but we are working now to help the family with some kind of closure and maybe rule out any foul play,” Lee said. “I want to thank the Adams County Sheriff’s Office and search and rescue team for their effort in recovering the remains.”

Lee said the skull was recovered approximately 1:50 p.m. Thursday, and if the skull does not match the remains found in the vicinity July 6 he will contact other family members who might have a loved one missing from an accident in the area.

“I have spoken to the family involved in the case who support our efforts in publicizing these articles to reach out for any assistance we can get,” Lee said. “Thank you, family.”