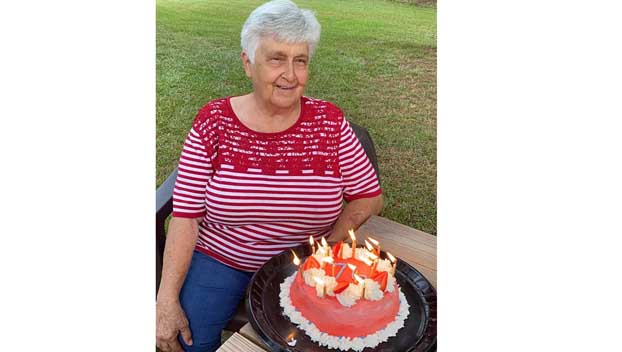 A Mississippi woman says what started as a small family get-together to celebrate her mother’s birthday ended in a nightmare.

The woman, Sherry Lister Breland posted her family’s tragic story Wednesday to social media in hopes it might shock others into not making the mistake her family made by not taking the COVID-19 virus seriously enough.

Breland in a public Facebook post described how her family decided in mid-June that COVID-19 seemed to be waning and decided to host a birthday party for her mother who was turning 76.

“After being extremely cautious in the beginning, seeing little impact, and being the joke of a few people, I began to let my guard down,” Breland wrote. “After all, there were only going to be 12 of us. Just immediate family. Not a large gathering.”

Breland’s daughter baked her Memaw a birthday cake from scratch, complete with buttercream icing. The party was a hit and the weather cooperated as the family enjoyed time with one another, Breland wrote.

“My mama was SO happy,” she wrote. “I had not seen her that happy in a while. It was a perfect birthday.”

Within days her mother was running a fever and coughing. She got tested and became sicker as she awaiting the test results over the weekend.

“Meanwhile, the rest of us were also getting sick but did not yet put 2+2 together,” Breland wrote.

Before long, Breland was in bed with a fever, two of her sisters-in-law had the same symptoms. Initially, two of their brothers just believed they has typical sinus or allergy symptoms.

Another of her brothers began running a high fever and was tested.

“By Monday, we had all talked and realized what had happened. We started getting the results back one by one,” she wrote. “Every one of us got COVID-19. You know. That virus that doesn’t exist. The virus that’s a joke. It’s a hoax. It’s the government trying to instill fear and take away your freedom. You know.

“The reason you have been asked to do stupid stuff like wear a mask and socially distance. But you’re not going to do that. Of course not. It’s an infringement upon your rights. And that mask. How silly and stupid. What could it possibly help? No one is going to make you wear a mask,” she wrote.

“Well, here we are one month after my mother’s birthday party, and we don’t have our mother anymore. Did you read that? We LOST HER after a long and tiring battle with COVID-19,” she wrote.

“I wasn’t ready for her to go; I needed more time. I miss her and want her back so badly. But this is my reality now. I can’t go back and change it, although I wish on a million stars I could. She loved her kids and grandkids more than life itself and was the happiest when she was with them. I’m crying ugly tears because it didn’t have to happen this way. Her 12 year old granddaughter is terribly heartbroken. They were like peas and carrots, and she can’t imagine her life without her Memaw. Our only solace is that she is in the arms of Jesus.”

But the virus didn’t stop there.

One of Breland’s brothers went to the ER on the same day as her mother did, thinking he’s be treated and released.

“That’s unfortunately not what happened,” she wrote. “He was admitted and is still there, fighting this ugly virus.”

Another brother fought the virus at home before being admitted just a few days after his mother.

“He is still there fighting, too,” Breland wrote. “Praise God he is now improving.”

Breland said her daughter, the one who baked the case, had the virus but was asymptomatic.

“In case you’d like to know how all this feels, I will tell you. It has felt like a living nightmare,” she said. “There’s more to COVID than cold or flu symptoms. There’s sickness, anxiety, fear, depression, loneliness, and isolation.”

Breland said the entire ordeal has been emotionally and physically trying.

“These last two weeks have been the worst of my entire life,” she wrote. “I am doing my best to lean on God throughout this ordeal. Ultimately, He is in control, and I know that.

“Maybe none of this scares you. Maybe the idea of someone you love DYING ALONE like my mother did, doesn’t scare you,” she wrote. “Maybe the idea of having to tell your very sick brother, who is on oxygen, by zoom call that his mother lost her battle with COVID, like I had to do, doesn’t bother you. Maybe you don’t care about your loved ones. Or the elderly. Maybe you are selfish. My prayer is that you wake up and realize that COVID is real and take precautions to prevent the spread. Wearing a mask won’t completely stop it, but it will slow the spread and may save the life of someone you love. It’s not that big of a deal.

“To those of you who think this is all a joke, please wake up. PLEASE help stop the spread. It may not affect you, but it could be someone YOU love. This virus has ravaged my family, and the next time it could be yours.”