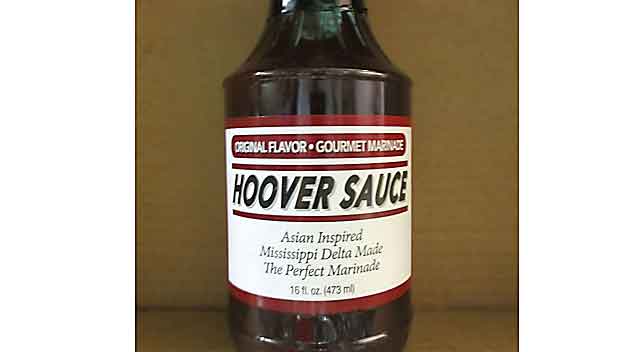 A Mississippi food legend has died last week, but his memory — and his renowned marinade and barbecue sauce — lives on.

Hoover Lee of Louise, Mississippi, died last week. He was 86.

A good Southern preacher might have joked, “Mr. Lee wasn’t from Mississippi, but he got here as soon as he could.”

And thousands of fan’s of Lee’s famous flavor, Hoover Sauce, are thankful he not only came to Mississippi but stayed here.

Lee was born in Canton, China,  in 1934 and came to the United States at the age of 9 months on The SS President Hoover. The ship’s name inspired his father when it was time to give Lee an American name.

His parents settled in the Mississippi Delta where Lee grew up, eventually graduating from Mississippi State University in 1956 with a business degree.

He served two years in the U.S. Army before coming home to Louise to help with his family’s business, Lee Hong Company.

Lee eventually got into politics, being elected to six terms, serving as an alderman and ultimately the mayor of his hometown of Louise.

His obituary says, “This man never met a stranger.”

Along the way Lee also learned about cooking, eventually developing a signature sauce that was so popular that he began selling. It was an immediate hit.

“My main thing was trying to get a sauce that tasted like roasted Cantonese duck — that type of taste,” Lee told The Associated Press in a 2007 interview.

“Hoover Sauce blends the saltiness of soy sauce with the sweetness of, well … Lee won’t say. Whatever it is, it works magic with chicken and baby back ribs, and he says people drive for miles to get it,” the AP’s article reads.

For thousands of Hoover Sauce fans, they are indebted to this true Mississippian who delighted their tastebuds with his signature flavor.

To purchase Hooever Sauce you can visit the family’s website at: https://www.hooversauce1.com/

Lee is survived by his wife, Freeda Gee Lee; two sons, Stan and Tim and a daughter, Shari, along with other family members.

Graveside services were planned for Wednesday in Yazoo City.

The last line of his obituary reads: “Hoover will always leave the Legacy for his Hoover Sauce used on grills and in recipes Throughout The Delta, the State of Mississippi and allover The U.S.A.”

Unknown seeds from China end up in Mississippi couple’s…