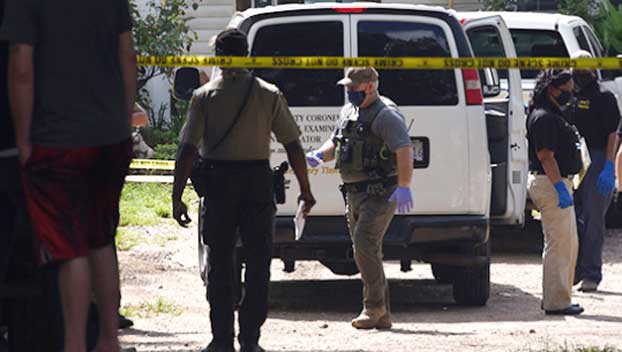 A former Mississippi high school band director was dead and a 15-year-old injured Friday morning in a shooting in Adams County. Witnesses said the adult shot the teen, then turned the gun on himself, a TV station reported.

Adams County Sheriff’s deputies are investigating a fatal shooting that occurred approximately 9:30 a.m. Friday at a house in the 800 block of U.S. 61, north of Natchez in the Washington community.

“About 9:30 Friday morning, we received a call about a subject being shot,” said Jerry Brown, chief deputy with the Adams County Sheriff’s Office. “He was en route to the hospital in a personal vehicle and there was also another subject lying in the driveway at that address and bleeding from his head.”

When deputies arrived on the scene, Brown said, they identified the subject lying in the driveway with a .45-caliber Smith & Wesson revolver lying nearby as 61-year-old Omar Cavazos of Clayton, Louisiana.

WLBT-TV reported that witnesses said Cavazos shot the boy in the arm and torso, then shot himself in the head.

“The subject was deceased,” Brown said. “The other subject that went to hospital had two bullet wounds. He is a 15-year-old juvenile. He was shot in the arm and in the torso area. He was flown out. I don’t know exactly what hospital they went to.”

Brown said investigators are still trying to piece together what transpired.

Brown said the juvenile did not have a gun and that Cavazos’ wound appeared to be self-inflicted.

“He (Cavazos) is formerly of Natchez,” Brown said. “He was a band director here (at Natchez High School) for years.”

Adams County Coroner James Lee said he was called to the scene and pronounced Cavazos dead at approximately 11:15 a.m.

“It is a terrible tragedy for everyone,” Lee said.