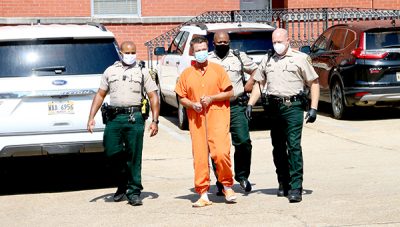 Warren County Sheriff Martin Pace announced Monday the arrest of two people — a husband and wife — in connection to the July 9 murder of a Gary Michael “Cowboy” McAlpin.

Deputies last Wednesday arrested Leslie Ann Harrison, 37, and charged her with accessory before the fact to murder. She is being held at the Warren County Jail under a $500,000 bond. Her arrest and changes were not announced until Monday.

At around 5 p.m. on July 9, a sheriff’s deputy on patrol in the Jeff Davis Road area was flagged down by individuals who said they found McAlpin, 50, in his home and that he appeared to have been shot.

Pace said investigators have recovered what they believe to be the murder weapon, a .22-caliber rifle that was discovered in a creek several miles from the crime scene.

He said the couple and the victim did have a relationship but declined to give any additional details.