More than 1,800 designs unveiled for consideration as new Mississippi Flag 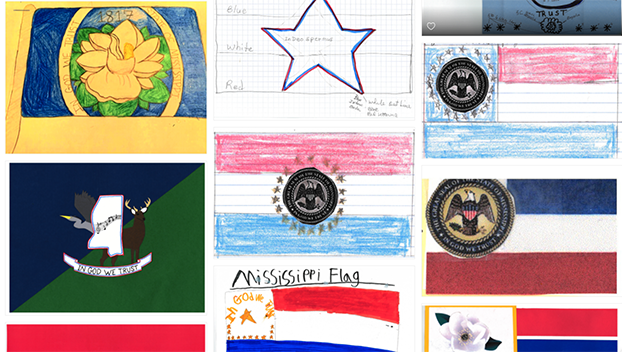 The more than 1,800 flag designs submitted by the public for the new Mississippi state flag were unveiled Monday.

The Mississippi Department of Archives and History released the designs at mdah.pic-time.com/-flagcommission/gallery

MDAH asked the public to submit flag ideas, with a Saturday deadline. Department spokesman Michael Morris said that by Friday, people had submitted more than 1,800 designs that meet the two criteria, plus some that do not.

The legislation passed by the Mississippi Legislature stipulates that the words “In God We Trust” be included in the new flag and that it not include the Confederate battle flag.

By early September, the commission will agree on a design to put on the Nov. 3 statewide ballot. They could accept one of the public submissions, combine elements from different designs or start from scratch and draw their own.

“We’re going to design and approve a flag that Mississippi can be proud of,” said former state Supreme Court Justice Reuben Anderson, the commission chairman.

If voters accept the proposed design, it will become the new Mississippi flag. If they reject it, the commission will find a new design and that will go on the ballot later.

“There have only been four major U.S. state flag changes in the past 66 years, and Georgia’s done it three times,” Moss said.

Georgia put the Confederate battle emblem on its state flag in 1956, during a backlash to the civil rights movement. It purged the emblem from its flag in 2001, then redesigned the flag again in 2003.

The fourth major flag change is the one Mississippi’s doing now, Moss said.

For decades, Mississippi legislative leaders said they couldn’t find consensus in the House and Senate to change the banner. Republican Tate Reeves was elected governor in 2019 after saying that if the flag were to be reconsidered, it should only be done in another election.

Momentum shifted in early June, when protests over racial injustice reinvigorated debates about Confederate symbols. Within weeks, leaders from business, religion, education and sports were lobbying Mississippi legislators to ditch the flag and replace it with a more inclusive design. Reeves agreed to sign the bill to retire the old flag after it became clear that legislators had the two-thirds majority they would need to override a veto.