Mississippi flag choices cut to nine finalists; which do you prefer? 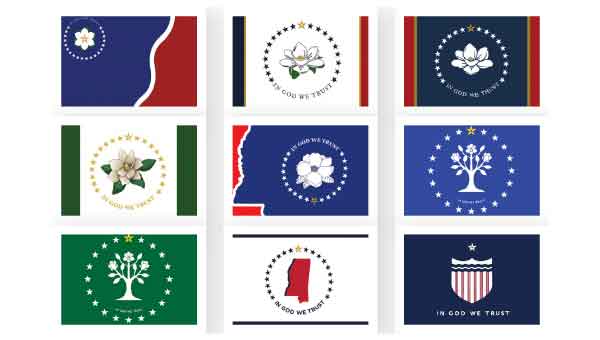 The new Mississippi flag could include a magnolia or stars or representations of rivers. Or it could reflect the state’s Native American heritage with a diamond shape that is important to the Choctaw community.

A group that will recommend a new flag met Friday and narrowed the field of proposed designs submitted by the public. Commissioners intended to select the final five, but gave themselves a bit more time. They chose nine designs, and will whittle that to five on Tuesday.

Mississippi recently retired the last state banner with the Confederate battle emblem that’s widely condemned as racist. The nine-member commission will recommend a replacement that cannot include the Confederate symbol and must have the phrase, “In God We Trust.”

Seven of the nine final designs are red, white and blue. Two are mostly green and white.

Cyrus Ben, chief of the Mississippi Band of Choctaw Indians, serves on the flag commission and said the diamond shape is frequently used in Choctaw baskets and bead work.

“The eastern diamondback rattlesnake is … a respected animal that also protected the crops in the fields,” Ben said. “So, that’s where you see that diamond design.”

The public submitted nearly 3,000 flag designs, and commissioners narrowed that to about 150 proposals that were posted Monday to the state Department of Archives and History website.

Commissioners are working with a graphic artist to tweak some of the submitted designs. By early September, they will agree on a single proposal to put on the Nov. 3 statewide ballot. If voters accept it, that design will become the new flag. If they reject it, commissioners will find a new design to go on the ballot later.

All eight of Mississippi’s public universities and a growing number of cities and counties stopped flying the state flag in recent years. For decades, Mississippi legislative leaders said they couldn’t find consensus to change the banner. Republican Tate Reeves was elected governor in 2019 after saying that if the flag were to be reconsidered, it should only be done in another election.

Momentum shifted in early June, after the May 25 killing of George Floyd by a Minneapolis police officer. The Black man’s death sparked global protests against racial injustice and reinvigorated debates about Confederate symbols. Within weeks, leaders from business, religion and education were lobbying Mississippi legislators to ditch the flag and replace it with a more inclusive design.

Two college sports organizations leveraged their power. The Southeastern Conference said it might bar league championships in Mississippi unless the state changed the flag. The NCAA said that because of the Confederate symbol on the flag, Mississippi could not host events determined by teams’ performances, which would affect sports such as baseball, women’s basketball and softball.

Reeves agreed to sign the bill to retire the old flag after it became clear that legislators had the two-thirds majority they would need to override a veto.