Mississippi flag committee whittles choices to five designs; which is your favorite? 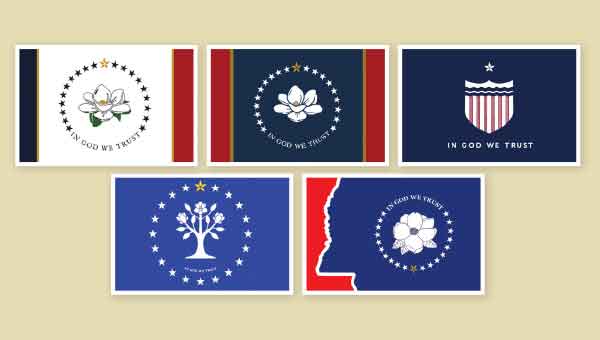 Mississippi legislators voted in late June to retire the last state flag in the U.S. with the Confederate battle emblem that’s broadly condemned as racist.

“When the flag came down, it was one of the great days of my life,” Reuben Anderson, chairman of a nine-member flag commission, said during Tuesday’s meeting.

The law shelving the old flag created the commission to come up with a new design that cannot include the Confederate battle emblem and must have the phrase, “In God We Trust.”

Four of the designs chosen Tuesday are mostly or entirely red, white and blue. One has a stylized white magnolia tree on a blue background. Most have stars representing Mississippi as the 20th state. Each includes one star made of five diamond shapes that reflect the state’s Choctaw heritage.

The five final designs will be sewn and flown. Commissioners hold their next meeting Aug. 25, and those flags will be hoisted outside the Old Capitol in downtown Jackson.

The Old Capitol is now a museum but was still the statehouse in 1894, when white supremacists in the Mississippi Legislature adopted a state flag with the Confederate battle emblem in the upper left corner. That vote reflected the backlash against political power African Americans briefly gained during Reconstruction.

The state Supreme Court ruled in 2000 that even though the flag had remained in use, it lacked official status because state laws were updated in 1906 and sections describing the flag were not included. Mississippi residents voted in a 2001 election to keep the Confederate-themed flag, but it remained a divisive symbol in a state with a 38% Black population. All of Mississippi’s public universities and many local governments stopped flying it.

Legislative leaders said for decades that they could not muster support to change the flag, but momentum changed rapidly after Minneapolis police killed a Black man named George Floyd and protests against racial injustice happened across the U.S., including outside the Mississippi Governor’s Mansion. The final push to change the flag came from business, education, religion and sports leaders.

Legislators created a nine-member commission, and that group received nearly 3,000 designs from the public. Commissioners will choose one design Sept. 2, and that will go on the Nov. 3 ballot. If voters accept the design, it will become the new Mississippi flag. If they reject it, the commission will find a new design to go on the ballot later.

Even as the commission is working toward a new flag, some Mississippi residents are rebelling against change. Organizers of a group called Let Mississippi Vote said Monday that they are starting an initiative to put the old Confederate-themed flag and three other flag designs on the statewide ballot. But the initiative process is burdensome, and their efforts will be complicated by the coronavirus pandemic. If the initiative gets to the ballot, that election could be a year or two away. And, Mississippi could be flying a new flag by then.

New coronavirus cases back up to two-week high in Mississippi

More than 80% of Mississippi counties have schools reporting…