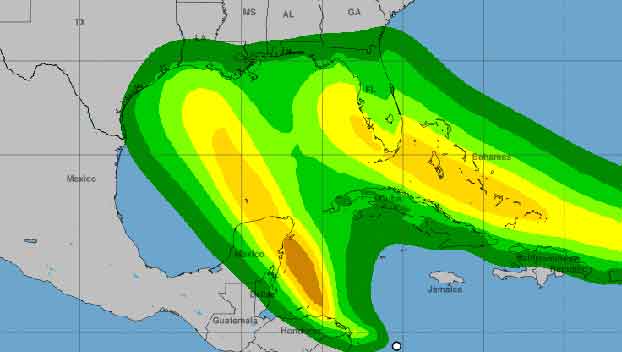 The Hurricane Center said Tropical Depression 13 was likely to become a tropical storm later Thursday and then skirt the Leeward Islands, Puerto Rico, the Dominican Republic and Cuba. The early, still uncertain track showed it potentially reaching Florida by Monday as a hurricane.

On Thursday, it was centered about 700 miles (1,120 kilometers) east of the northern Leeward Islands with maximum sustained winds of 35 mph (55 kph) and it was headed briskly to the west-northwest at 21 mph (33 kph).

Tropical Depression 14 was forecast to graze the Atlantic coast of Honduras, then curve across Mexico’s Yucatan Peninsula and potentially head for Texas or Louisiana coast as a tropical storm by next week, though the track and force that far out remained highly uncertain.

On Thursday, it was centered about 210 miles (375 kilometers) east of Cabo Gracias a Dios on the Honduras-Nicaragua border, with maximum sustained winds of 35 mph (55 kph). It was headed west at 18 mph (30 kph).