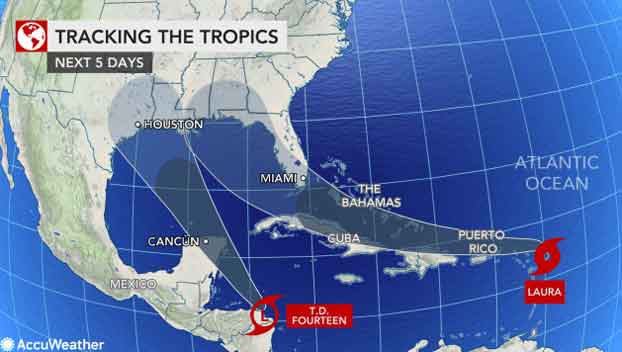 Tropical Storm Laura developed in the Atlantic just a couple of hundred miles east-southeast of the northern Leeward Islands on Friday morning. The storm not only shattered the record for the earliest L-named storm on record in the basin, but it will also forge a track toward the United States early next week.

Laura is the ninth storm to set a new early benchmark this season, beating the previous “L-storm” record held by Luis, which formed on Aug. 29, 1995. Tropical storm watches are in effect for the Leeward Islands, Puerto Rico and the Virgin Islands, as well as the southeastern Bahamas as Laura races westward at 21 mph.

Accuweather meteorologists have been watching the tropical Atlantic with extra close attention as the anticipated ramp-up of an already record-setting hurricane season begins. Forecasters are monitoring Tropical Depression 14, which could soon become Tropical Storm Marco, and they warn that both systems could make U.S. landfalls a day apart early next week.

Another disturbance near the coast of Africa, which is expected to take a few more days to develop, is also being watched closely by AccuWeather meteorologists.

The Leeward Islands are first in the path for impacts from Tropical Storm Laura.

“Laura will spread gusty winds and the possibility of periodic heavy rainfall westward over parts of the Leeward Islands from Friday to Saturday,” Lead Tropical Forecaster and Senior Meteorologist Dan Kottlowski said.

With the current forecast for some gusty winds and downpours to the northern Caribbean, Laura will be less than one on the AccuWeather RealImpact Scale™ for Hurricanes, a scale that rates tropical systems from less than one to 5 based on expected impacts.

People across the northern islands of the Caribbean, as well as the Turks and Caicos, southern Bahamas, the Florida Keys and the southern part of the Florida Peninsula, should be prepared for tropical storm conditions, as an average, as the storm moves along with the potential for more significant conditions, depending on the exact track and strength of the feature itself.

Should the system track just north of the northern islands of the Caribbean, conditions there may not be severe, but it could allow the center of the storm to strengthen further over warm water with minimal impediment from the high mountains in Puerto Rico and Hispaniola. Such a scenario could bring damaging conditions to the Turks and Caicos and part of the southern islands of the Bahamas.

“We expect Laura to move across the Florida Straits and it may strengthen into a hurricane on Sunday or Monday before taking a turn northward in the Gulf of Mexico,” Kottlowski said.

Article published with permission from Accuweather.com