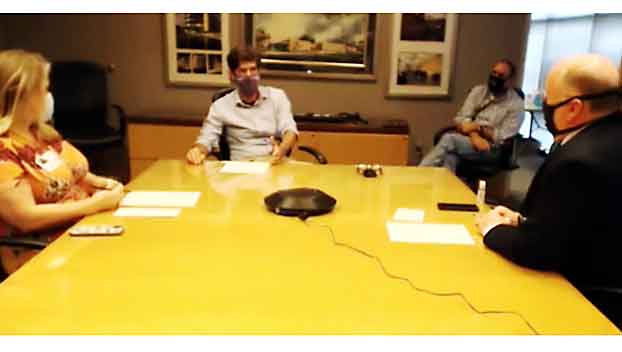 Mississippi’s top medical officer said Friday he expects a “crush” of COVID-19 coronavirus cases across the state in a few weeks because schools and colleges are reopening and people are making poor decisions by not following health guidelines.

“We still have like 800 cases a day which is awful, but it’s not as bad as 1,700 right,” Dobbs said. “This is the real issue: We suspect within three to four weeks we’re going to have another crush, another peak, of cases because schools, colleges and really, really bad judgment coming together in a triumvirate of disaster.”

Dobbs said although the current numbers of new cases have come down some, those cases were mostly contracted before schools have opened and now that more people are out and about congregating together he expects cases to rise soon.

“It’s hard to imagine that we’re not going to have a real problem in a few weeks, based on what’s going on,” he said.

Dobbs said the state health department has removed the restrictions on certain types of elective surgeries as the current case numbers have come down and doing those surgeries now will get them out of the way before the anticipated spike comes.

Dobbs said the outbreaks at colleges and universities were anticipated.

Dobbs said the time on campus isn’t where the virus is being contracted.

“It’s the Cotton District, it’s the Square, it’s the parties,” he said.

But Dobbs what has surprised him is the poor judgment being made by parents of high-school-age children.

“My gosh, the parents. I’m so disappointed in the parents,” he said. “I’m just astounded. A lot of the outbreaks we’re seeing at high schools is because parents are hosting parties, senior parties, groups, spend the night parties.”

Dobbs said parents should use common sense and be fearful of such interactions.

“I don’t know why this doesn’t scare people, but it’s illegal,” he said. “What if something goes wrong and you’re hosting a party for 150 people?”

“Young people are going to die,” he said. “We had a healthy teenager who died from coronavirus with heart failure. Also, we’re investigating an infant who died with the virus.”

Dobbs said people need to realize that the virus is out in the community and spreading, even by people who don’t look sick.

“Pretend like everybody’s got coronavirus, all the time,” he said. “Probably 2 out of every 100 people is going to be contagious.”