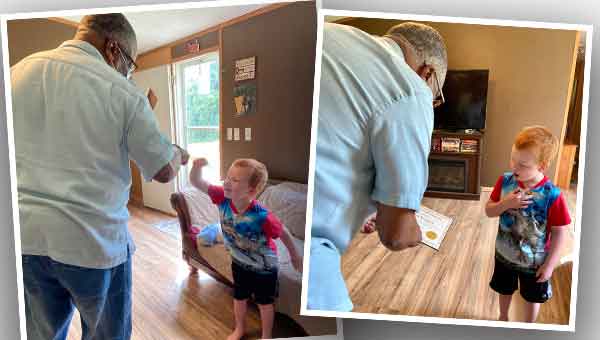 Waylon Wigley may only be a kindergartener at Bovina Elementary, but he already has a future in economic development.

Tuesday, Wigley, with a little help from his mother, wrote a letter to Vicksburg Mayor George Flaggs Jr., asking the mayor to build a Target.

Elizabeth said that when she was pregnant with Waylon, living in Cape Girardeau, Mo., she would often shop at Target. After Waylon was born, she would routinely take him on trips to Target — sometimes for hours. “He grew up there,” she said.

But recently, Waylon was upset. After watching an episode of Ryan’s World on Youtube, Waylon came to his mother in tears, saying Vicksburg didn’t have a Target. Yes, there was a Walmart, but Target, he said, had a larger selection of Legos.

So, that is when Waylon went to work.

She said the two sat down at the kitchen table and began to write a letter. All of the words were Waylon’s, with a little help from mom on the spelling.

The following morning, she said, the post had been liked hundreds of times and had received dozens of comments and shares.

“The next morning, I got a call from Mayor Flaggs’ secretary saying the mayor wanted to meet Waylon and present him with a certificate,”  she said.

“Waylon was shocked. When he saw the mayor’s vehicle driving up, he got so excited, jumping up and down,” Elizabeth said.

During the visit, Flaggs presented Waylon with a certificate and a gift card to Walmart.

“I told him we didn’t have a Target, but we did have a Walmart,” Flaggs said. “I told him you can really buy toys anywhere, but he was insistent that he needed to get toys at Target.”

While the certificate and gift card were nice, Waylon wanted something else. “He grabbed Mayor Flaggs’ hand and said, ‘you need to see my bedroom. Will you play with me?”

Flaggs said it was a great visit for him, too.

“He was so excited about his room and meeting me. I just thought it was an opportunity of a lifetime for me,” Flaggs said. “He will grow up remembering that the mayor came to his house, saw his bedroom and visited him because of a letter he wrote.”

But what about Target?

“I told him we would work on it,” Flaggs said. “It’s great input. It is something we need to look at, so we will do it.”

He also said the fact that someone as young as Waylon knows the power of a letter is encouraging.

“It should inspire other young people to get involved, write their government officials,” Flaggs said. “That’s how you get things started.”

As of Friday morning, Elizabeth said she had received an email from Target, providing the family an e-gift card and officials at the North Jackson Target have also reached out to the family.