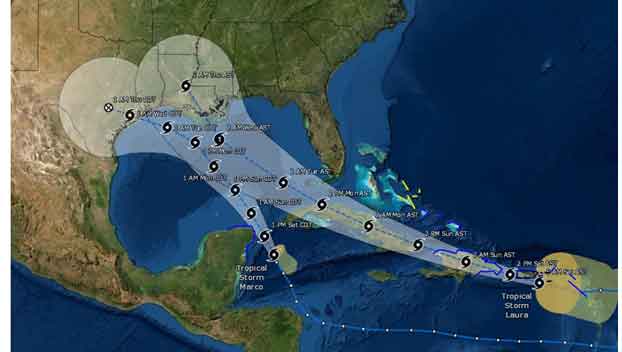 The 2020 Atlantic hurricane season is off to a record-setting pace, and the two systems tracking across the basin could set another first in hurricane records dating back into the 1800s.

Tropical Storm Laura and Tropical Storm Marco are both on a path that would take them into the Gulf of Mexico at the same time next week.

These systems have nearly the entire Gulf Coast on alert for potential impacts, and they could become the first pair of systems to be in this part of the Atlantic Basin at the same time in decades.

It is rare for there to be two tropical storms in the Gulf of Mexico at the same time. According to NOAA records, this has only been recorded twice: June 18, 1959 and Sept. 5, 1933.

In early September of 1933, two hurricanes were barreling toward the U.S. — one dubbed the 1933 Cuba-Brownsville Hurricane in the Gulf of Mexico headed toward Texas and the other near the Bahamas, the Treasure Coast Hurricane, tracking toward the east coast of Florida.

On Sept. 4, the Treasure Coast Hurricane made landfall near the border of Palm Beach and Martin counties in Florida as a Category 3 hurricane with maximum sustained winds of at least 140 mph. Meanwhile, the 1933 Cuba–Brownsville hurricane slowly advanced toward Texas.

These storms, according to Klotzbach, had all made landfall within 24 hours of each other, typically during the first half of the hurricane season, though only one of each duo would make landfall within the Gulf of Mexico.

More recently, on June 18, 1959, there was a small window of time when two tropical storms were spinning over the Gulf simultaneously — Tropical Storm Beulah and a newly-formed tropical storm that would later strengthen into Hurricane Three.

“1959 had two tropical storms in Gulf but only at one point in time — 18Z on June 18 when the one on the right just formed,” AccuWeather meteorologist and weather editor Jesse Ferrell said. “The next update at 00Z, the one on the left was a tropical depression.”

Laura and Marco are on a path that would place them in the record books amid these other two instances next week, though perhaps with a stronger presence.

It is likely that they will become just the third pair of tropical storms to be in the Gulf at the same time, but if they both manage to become well-organized, there is the potential that they could both be hurricanes.

This would be the first time in recorded history dating back to 1851 where two hurricanes occupy the Gulf at the same time, the National Hurricane Center said.

With these two tropical systems coming in such close proximity of each other, it raises the question if they will interact with each other in a phenomenon known as the Fujiwhara effect.

“When two [storms] spinning in the same direction pass close enough to each other, they begin an intense dance around their common center. Two storms [close] in strength can gravitate towards each other until they reach a common point and merge,” the National Weather Service explained.

However, it is unlikely to happen with Laura and Marco, according to AccuWeather’s top hurricane expert Dan Kottlowski.

“That won’t happen here because, first of all, the Gulf is not big enough for that to happen, and two, these storms are not headed toward each other,” Kottlowski explained.

“Usually what happens is you get two storms of equal size and equal strength that rotate around each other, and that’s what is referred to as the Fujiwhara effect,” he added. “We see that happening rarely sometimes in the Pacific, we may have seen it sometimes in memorable history here in the Atlantic.”

Rather than a dance, the Gulf of Mexico might just see a fight for survival between two hurricanes.

“Usually what happens when two hurricanes come close to each other you have what is called binary interaction,” Kottlowski said. “The stronger of the two usually shears the other one out or causes the other one to weaken.”

In this survival of the strongest scenario, the stronger storm would sap the moisture from the weaker one, absorbing it or catching it up in the stronger circulation.

“They’re not gonna come that close together, but they will be close enough that probably Marco will become the stronger of the two and that will limit how strong Laura becomes,” Kottlowski said.

Regardless of the precise interaction between the two storms, they are forecast to make landfall along the Gulf Coast during the first part of next week.

If both systems make landfall in the U.S. before the month is over, another record would fall. According to Klotzbach, the record number for landfalling storms in the continental U.S. through the month of August is six. There have already been five landfalls on U.S. soil as of Aug. 21, including Bertha, Cristobal, Fay, Hanna and Isaias.

The 2020 Atlantic Hurricane Season has already had 12 named storms with the addition of Laura, two of which have become hurricanes. This places the season above normal in activity for the number of named storms in the basin as well as the collective energy for this point in the season.

“From ACE, our accumulated cycle and energy perspective, we are riding above normal. We’re running about 50% more than what you get in an average season to date, but typically the hurricane season doesn’t really ramp up until around this time,” Klotzbach said. “You get about two-thirds of all your hurricane activity between Aug. 20 and Oct. 10 in an average hurricane season.”

Residents should take time now to prepare for the storms and keep in mind that even a tropical storm can be deadly, as seen from Isaias while at tropical storm strength.

Article published with permission of Accuweather.com.