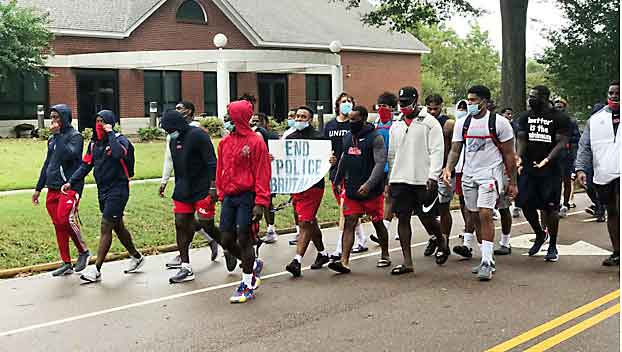 Ole Miss football players march up University Avenue from the Oxford Square back to the University of Mississippi campus after boycotting Friday morning’s practice. The boycott was in the wake of the shooting of Wisconsin man Jacob Blake by a police officer earlier this month. (Jake Thompson/Oxford Eagle)

The wave of activism sparked by cases of police brutality around the nation has again landed in Mississippi with the Ole Miss football team deciding not to take to the practice field Friday after a similar demonstration a day earlier at Mississippi State.

Ole Miss players marched from the campus to the Oxford Square after boycotting practice. The march was in protest of police brutality in the wake of the shooting of Jacob Blake, a Wisconsin man who was shot seven times in the back by a Kenosha police officer earlier this month. The shooting has reignited protests and unrest nationwide.

“As the Ole Miss football family, we are committed to change,” the players said in a statement distributed by the university. “Police brutality and other injustices occurring across our nation have to end, and our team stands united to embrace our diversity and promote a culture of peace, equality and understanding. Regardless of our backgrounds, we all need to listen to each other and learn to respect and love our differences.”

Friday’s action came after several college football programs across the country skipped practice on Thursday. Mississippi State went to Unity Park in Starkville instead of practicing.

Earlier this summer, the Ole Miss athletics department held a Unity March on campus. Football coach Lane Kiffin participated then and on Friday, joining his players during the march to the Square.

“I’m proud of our players coming together for justice and change,” Kiffin said in a statement released by the school. “We are going to continue to work together to improve the world around us for everyone.”

In Starkville on Thursday, about 80 Mississippi State football players gathered in solidarity to protest against racial injustice.

“Black, brown, blue, whatever, it doesn’t matter,” senior defensive end and Starkville native Kobe Jones said as players prepared to disperse. “We love you all.”

College football joined other boycotts as the NBA saw teams sit out on Wednesday and Thursday, not playing their scheduled playoff games. Major League Baseball also had teams do the same as did the National Hockey League. NFL teams opted to not practice this week.