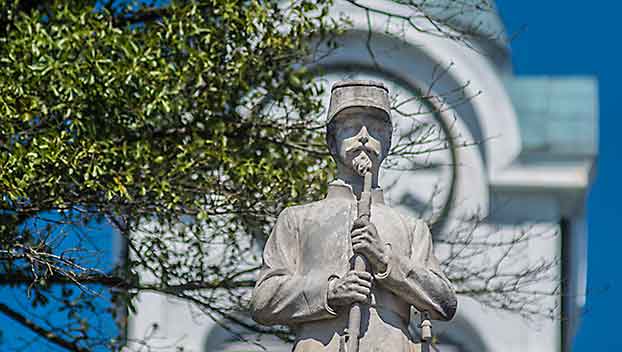 Refusing to give up, some north Mississippi residents are still urging an all-white board of county officials to move a Confederate monument away from an old courthouse on the town square in Oxford.

The Lafayette County Board of Supervisors voted in July to keep the rebel soldier statue in place, with one supervisor saying he had been a victim of racism because he’s white and others saying that African American leaders had never expressed concerns about the statue.

A newspaper’s public-records request shows that the Lafayette County supervisors received messages from business people, college athletes and politicians who asked them to relocate the monument because it presents an unwelcoming image in a diverse community.

The Northeast Mississippi Daily Journal received hundreds of email and text messages that were sent to the supervisors about the monument, which has stood since 1907. Protests against racial injustice across the U.S. in the past three months have brought renewed debate about the display of Confederate monuments and other symbols in public spaces.

Former Oxford Mayor Richard Howorth owns Square Books, which faces the monument. He texted several supervisors and asked them to relocate the monument because it’s “both the smart and the right thing” to do.

Howorth later told the Daily Journal that debate about the monument has lasted too long.

“I look at it every single day,” Howorth said of the statue. “Every day, I think it is a sign that we are disrespecting our Black fellow citizens, neighbors and friends. For that reason alone, it needs to be dealt with.”

Kesha Howell-Atkinson, the only Black woman on the Oxford Board of Aldermen, emailed several supervisors June 13, saying the statue “is a negative representation” of Oxford, and she would like to see it relocated.

“I believe the statue also hinders positive strides our town and community at large have made in the area of race relations,” Howell-Atkinson wrote. “There are projects, people and events coming to Oxford. We should not allow visitors to be able to judge us, develop a negative impression of our community and convey to others a negative impression about us.”

Another Oxford alderman, Janice Antonow, told supervisors in a mid-July email that she would give them “complete support” if they moved the statue.

“Besides being offensive to many citizens, the statue in its present location will always serve as a magnet for protests, pro and con, and will continue to strain our resources that could be better used for more positive events,” Antonow wrote.

The University of Mississippi is in Oxford and Lafayette County. In June, several of the school’s athletes posted a video on social media calling for supervisors to move the statue. Records also indicate county supervisors met with football player Mohamed “MoMo” Sanogo to discuss the monument.

“If one of y’all want to join, I am meeting with Momo Sanago at 1 at chancery,” board president Mike Roberts wrote in a group text to other supervisors.

Another supervisor asked what the meeting was about. Roberts said Sanogo wanted to talk about the monument and then Roberts used a sad face emoji.

None of the supervisors responded to the Daily Journal’s request for comment.

Sanogo, through a spokesman for the university’s athletics department, said he was grateful for conversations with supervisors.

“Obviously we are disappointed with the current decision,” Sanago said. “We realize the negative pressure that the board faces, and we will continue to provide positive support for the removal of the statue.”

The Rev. Duncan Gray III, retired bishop of the Episcopal Diocese of Mississippi, has a long history as an advocate for racial reconciliation but says he’s a relative newcomer to the effort to move Confederate monuments from prominent spaces.

Gray texted Supervisor Chad McLarty and asked him to place the monument question on the board’s July 6 agenda, and he offered to speak in favor of relocation. McLarty responded by thanking Gray for his opinion, but did not ask him speak.

Gray said he passed the statue “a thousand times growing up and never thought about it.” But he said that through research, he discovered that language inscribed on the statue reflects the language white supremacists used as a justification for lynching African Americans during the Jim Crow era. He also believes that symbols play an important role in the subconscious mind of people.

“Christian and other clergy know this intuitively, if not by training,” Gray said. “It’s why we’re so careful with the symbols of the faith.”

Gray later participated in a news conference with local clergy asking supervisors to reverse their decision and relocate Confederate monuments. Lafayette County supervisors have shown no intention of revisiting the issue.

Oxford officials have raised questions about whether the Lafayette supervisors control the monument. Oxford sent county supervisors a letter Aug. 18, raising the possibility that the statue is on property owned by the city and not the county.

Wobble in her track – and some luck –…