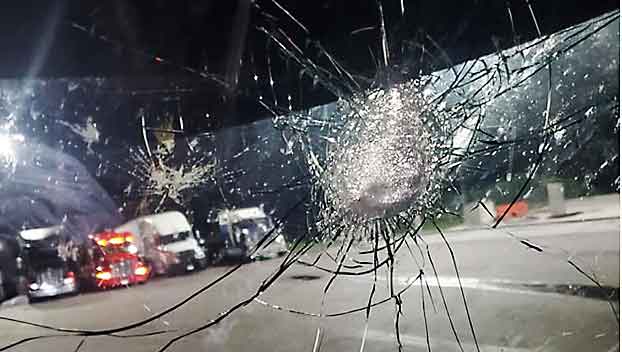 Truck driver Andrew Meeks said he and several other drivers were attacked last week with rocks as they traveled a stretch of interstate in Mississippi. (Photo courtesy Andrew Meeks via Facebook)

A Georgia semi-truck driver passing through Mississippi says he said and three other drivers were attacked by people throwing rocks at their trucks from an overpass.

Andrew Meeks reported that he and his wife were driving westbound on Interstate 20 near at approximately mile marker 169 near Toomsuba when the attack occurred late Friday night or early Saturday morning.

Meeks posted details on his personal Facebook page as a warning for other truck drivers to be careful and aware of the attack.

He said “large objects and rocks” were either thrown or launched at big trucks from an overpass.

“Sounded like a cannonball hit the windshield,” Meeks wrote. “We are OK, thankfully, it could have been much worse.”

Meeks wrote that another driver was hit in the face by a rock after it pierced his truck’s windshield.

The driver was no seriously injured, Meeks wrote.

Prison escapees from Tennessee believed to be traveling in…