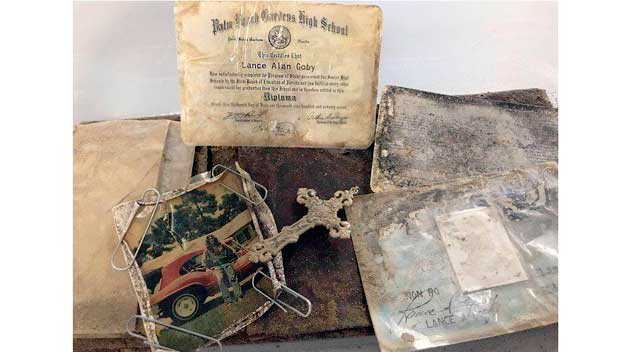 Chris Robinson never thought he would come across a buried treasure of sorts while working on a water line to a new fire hydrant onboard Naval Air Station Meridian Friday.

“We were digging about 4 feet down in the ground, I stopped and looked and there was a wallet,” said Robinson, a plumber whose been on the job for only about three weeks at the base. “It was still in good shape, but a little wet.”

Robinson took it back to Public Works and tried to dry it out while inspecting its contents. Inside was a miniature diploma from Palm Beach Gardens High School in Florida with the name Lance Alan Goby, a photo of a young man by a red car, a silver cross and several other personal items dating back to 1981.

“It’s been in the ground for 39 years — that’s so amazing,” Robinson said.

Public Affairs Officer Penny Randall believes it was probably a Navy or Marine student who dropped it many years ago along Fuller Road which is a common path for students to walk to the gym and medical clinic.

“We would love to find Mr. Goby and return his wallet, and find out if he was in fact in the Navy or Marine stationed at NAS Meridian.”

If you know Mr. Goby please contact the Public Affairs Office at 601-679-2602 or email penny.randall@navy.mil