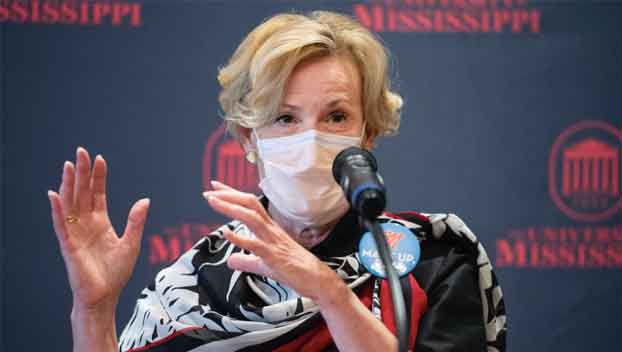 Dr. Deborah Birx of the White House Coronavirus Task Force speaks at a news conference during her visit on Saturday, Sept. 12, 2020 to the University of Mississippi. (Logan Kirkland/ Ole Miss Digital Imaging Services)

The City of Oxford and University of Mississippi received words of encouragement and the message of staying the course in their COVID-19 response plans on Saturday.

Dr. Deborah Birx, a member of the White House Coronavirus Task Force, met with Chancellor Glenn Boyce and Mayor Robyn Tannehill to discuss how the University and city have handled the coronavirus pandemic, along with a spike in cases, since students returned to campus last month.

With new cases and hospitalization rates trending down across the state, Lafayette County has continued to be a hotspot in recent weeks, setting record highs in new daily cases a couple of weeks ago. In spite of the increasing numbers, Birx commended the efforts made by Tannehill and the Board of Aldermen since the pandemic hit Lafayette County in March.

Roughly eight weeks ago, Mississippi was considered a red zone, or hotspot state, with over 60 counties having over a 10-percent positive test rate, according to Birx. In the last five weeks, that number has dropped to 23 counties. Statewide, the positivity rate has dropped from 17 percent to eight percent.

Birx spoke with both Boyce and Tannehill regarding bringing back students for the fall semester, as well as keeping businesses and restaurants open.

“We had very clear and concise dialogue about, really, a way forward. But, the entire South has shown us a way forward with this virus,” Birx said. “With what Mississippi has been able to do just over the last four to five weeks shows us, that if we change our behavior and wear a mask and we social distance and we wash our hands and we really take care of others, there’s a pathway forward that maintains (keeping) retail open. It maintains Universities and it maintains schools open. But, it takes all of us working together to really protect the community.”

The Oxford Board of Aldermen met on Sept. 8 and voted to keep in place the ordinance ending service at all bars and restaurants at 10 p.m. However, they also voted to keep those establishments open until 11 p.m. on Friday and Saturday nights during Ole Miss home football game weekends.

“There were several things that we discussed this morning,” Tannehill said of her meeting with Birx. “I don’t know how much new information it was, because I have listened to her throughout this pandemic, but it was reassuring to hear her say that she believes that the plan that we have in place is effective. Instead of people closing back down, that you have to find ways to work through these rises in cases. She does not recommend shutting back down as far as businesses go.”

The crux of Birk’s visit was to speak with Boyce regarding the COVID-19 active cases among the UM community, primarily among the student population.

Other colleges across the country, most notably Notre Dame and the University of North Carolina, shifted to only virtual learning after the first week of in-person classes.

According to Boyce, Ole Miss has not reached any threshold barriers the University has set in place, and administration is monitoring several factors that are included on the dashboard, such as active cases and the quarantine and outbreak numbers that would warrant closing down campus.

“We’re also keeping close contact with our hospital, making sure they have space in case hospitalizations occur. Now, obviously the age group that’s most impacted right now, there has not been a lot of hospitalizations.”

Provost Noel Wilkin, who was also present during Saturday’s media availability, noted somewhere between 300 to 400 students have been quarantined at some point since the University started its quarantine procedure.

On Friday, Birx said she went to the Downtown Square, and commented on seeing many students following the mask mandate that Oxford’s Board voted into law last month, which requires masks to be worn outdoors where social distancing is not possible, mostly in areas where people are waiting in lines to eat around the Square. According to Birx, not everyone was following that mandate.