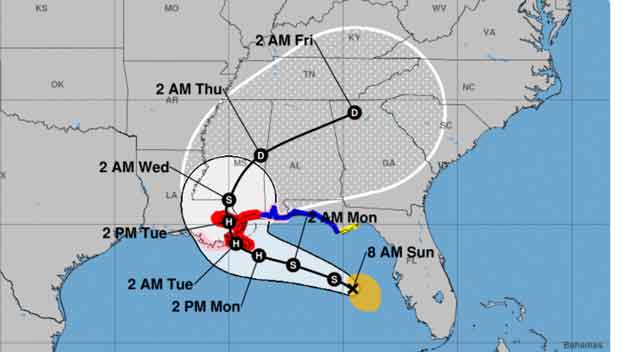 A storm surge warning and a tropical storm warning were also in effect for parts of the Gulf Coast.

Overnight hurricane forecasters changed their guidance slightly to show the storm is now likely to reach Category 2 strength with maximum sustained winds of approximately 100 mph and the possibility of creating a damaging storm surge of more than 10 feet.

Louisiana Gov. John Bel Edwards declared a state of emergency Saturday, and officials in the New Orleans area issued a mandatory evacuation order for areas outside of levee protection.

The tropical storm had maximum sustained winds of 50 mph (85 kph) with higher gusts, forecasters said. Sally was expected to strengthen into a hurricane Monday and reach the coast late Monday and Tuesday.

Storm surge from Sally was forecast to reach dangerous levels, due in part to the tide. Up to 11 feet (3.4 meters) of water was predicted from the mouth of the Mississippi River to Ocean Springs, Mississippi, including Lake Borgne.

A slow moving storm, Sally could produce rain totals up to 20 inches (51 centimeters) by the middle of the week, forecasters said. The system was moving west-northwest at 13 mph (20 kph) early Sunday. It was centered 115 miles (190 kilometers) west of Port Charlotte, Florida, and 345 miles (550 kilometers) east-southeast of the mouth of the Mississippi River.