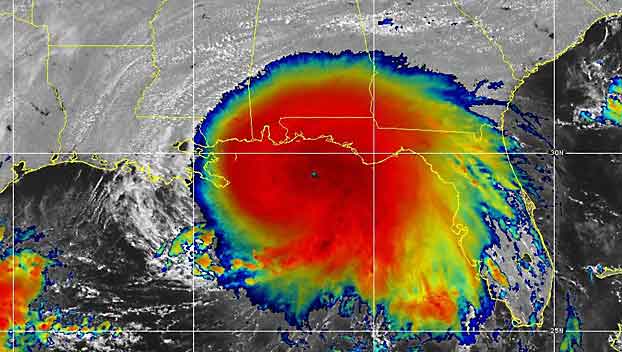 Gulf Coast residents were rushing preparations to completion on Monday as the region braced for another hit from a hurricane — a little over two weeks after Laura’s devastating blow to areas farther west. Sally strengthened over the north-central Gulf of Mexico, with maximum sustained winds increasing to 90 mph Monday midday, as outer rain bands began soaking parts of the Florida Panhandle and western Florida.

“While some additional strengthening of Sally is likely into early Tuesday, it is believed that the hurricane will weaken a bit prior to making landfall due to slow movement of the storm causing Gulf waters to cool and increased friction from the land,” according to AccuWeather’s top hurricane expert Dan Kottlowski.

“We also expect wind shear to increase over the storm prior to making landfall, which would imply weakening of the intensity as well, but regardless this will still be a significant hurricane strike in the region.” Kottlowski said.

Sally was churning 160 miles southeast of Biloxi, Mississippi, during Monday afternoon. The hurricane was crawling slowly west-northwestward at 7 mph.

State of emergency declarations have been issued by Louisiana Gov. John Bel Edwards and Mississippi Gov. Tate Reeves prior to Sally closing in on the region. Mandatory evacuations have been ordered in low-lying areas of both states, including for areas outside of New Orleans levee system.

AccuWeather meteorologists expect Sally to take a northward turn that keeps the eye just east of the Mississippi Delta region of Louisiana with a landfall along the Mississippi or Alabama coast late Tuesday night to early Wednesday morning. With this more eastward track, concern is increasing for a significant storm surge on Mobile Bay, Alabama.

As the system moved from the waters off Florida’s southeast across the southern tip of the Sunshine State and over the Gulf, local officials along the Gulf Coast began taking action to prepare for Sally’s arrival. Edwards noted on Twitter that parts of Louisiana were ravaged by Hurricane Laura late last month.

“This when combined with the COVID-19 pandemic, can make us all weary,” Edwards said on Twitter. “I implore Louisianans to take their preparations seriously.”

Sally was the earliest named “S-Storm” to ever form in the Atlantic Ocean basin, beating out 2005’s Hurricane Stan which was named on Oct. 2.

In less than 24 hours, Sally went from being a mass of showers and thunderstorms east of the Bahamas on Friday afternoon and to a tropical depression on Friday evening, before becoming a tropical storm on Saturday afternoon.

Torrential rain fell across South Florida as the tropical disturbance passed through. Marathon and Key West, Florida, both set preliminary daily and monthly rainfall records, with 8.13 inches and 9.37 inches falling, respectively, on Saturday.

Beachgoers and boaters should be prepared for rapidly changing conditions that include sudden squalls, downpours and rough seas and surf. Sally could produce a couple of isolated tornadoes and waterspouts as its outer bands sweep along the western coast of Florida Monday.