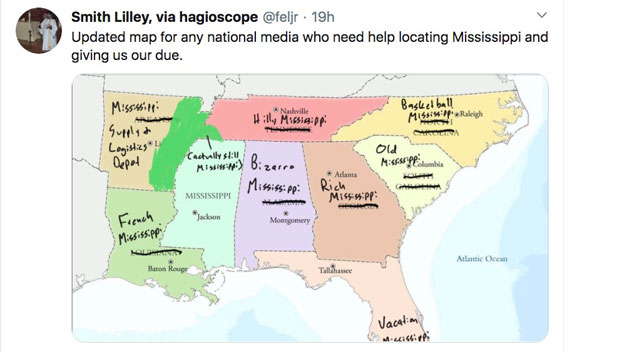 America, it’s us, Mississippi! Remember us? We brought you Elvis, the Muppets, Walter Payton, B.B. King. Any of those ring any bells?

We’re that state tucked politely between Lousiana and Alabama. And, yes, the state does in fact touch the Gulf Coast. We’re not just a “land mass” between New Orleans and Mobile, we’re a full-blown, bonafide state. We’ve got our papers and everything.

So the whole joke started during a national television channel’s coverage of Hurricane Isaac in 2012. A live, on-air broadcaster inadvertently referred to Mississippi as the “land mass” between New Orleans and Mobile and, it’s been a running joke ever since – or at least every hurricane season.

It’s become almost a badge of honor for Mississippians. As soon as a tropical storm or hurricane enters the Gulf of Mexico, the national media seems to totally ignore us.

So this week as Hurricane Sally first took aim on the Mississippi Gulf Coast, sure enough, the national media hit their marks, referencing “the Louisiana-Alabama border” (doesn’t exist as Mississippi is between the two states).

USA Today reworked the map entirely, wiping Alabama out entirely and labeling both the real state of Mississippi and the state of Alabama as Mississippi (we like that newspaper, though it’s not accurate).

As it lurches over the Gulf Coast, Hurricane Sally could bring 8 to 16 inches of rain, with some areas seeing up to 24 inches.https://t.co/dWSkh2HBq7 pic.twitter.com/Gk5gdLiNzm

So the wonderfully witty folks in the Twittersphere have kicked into overtime.

When The New York Times referenced the storm “likely to hit a stretch of the Gulf Coast from west of New Orleans to Alabama …” @samrustomjr wrote: “That stretch would be called Mississippi.”

@wigginstock wrote: If only there were a name for that #landmass.

Erin Napier the Mississippi star of the HGTV show “Home Town” wrote “Come on, nytimes. We have a name.

@feljr chose to simply follow President Trump’s lead on using a Sharpie to fix any map issues by jotting in the “correct” names of states across the South in reference to Mississippi as follows:

And then there’s the really off-base comparison to Michigan (MI) instead of Mississippi (MS): 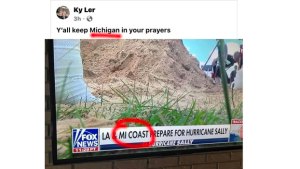 Actually, we would just be happy if the national media just called us by our own name.

Mississippi’s new coronavirus cases bounce back up after weekend…