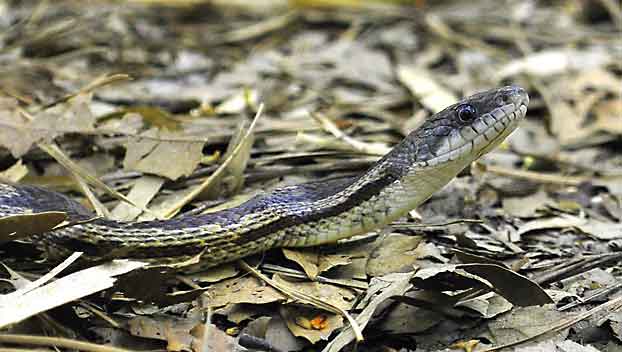 A woman in Mississippi received a slithering surprise when she got home from work last week: a snake that had been lodged on top of her front door landed on her head.

The encounter happened after the intruder made its way on top of Christina Mitchell’s door on Thursday, the Enterprise-Journal reported. “I felt this thump on my head,” Mitchell said. “I looked down and the snake had landed at my feet in the house.”

The newspaper reports the 10-inch (25-centimeter) serpent then darted to the kitchen while Mitchell called her husband to let him know about their new visitor. But she didn’t wait for help. She grabbed a broom and ushered the reptile out of her house in McComb, a city located about 80 miles (127 kilometers) south of Jackson.

“He did his striking pose because it was just a scared little rat snake,” Mitchell said. “He tried to bite at my broom whenever I put him outside. He probably thought that was really rude. We kind of had a stare-down.”

Based on the photo Mitchell took, her sparring partner looked like an Eastern Rat snake, a largely nonvenomous reptile, according to the National Wildlife Federation.

Mitchell was concerned since the animal had a large jaw, but she has been familiar with snakes since she was a child and says she would not go out of her way to kill an animal, even if it lands in her house.

“I actually really like snakes,” she said. “I think they’re fascinating.”

She also does not plan to move the pitcher plant, even though it might have attracted the snake.

“I just love my pitcher plant,” she said. “I feel like I’ll just take my chances and open my door really slow from now on.”