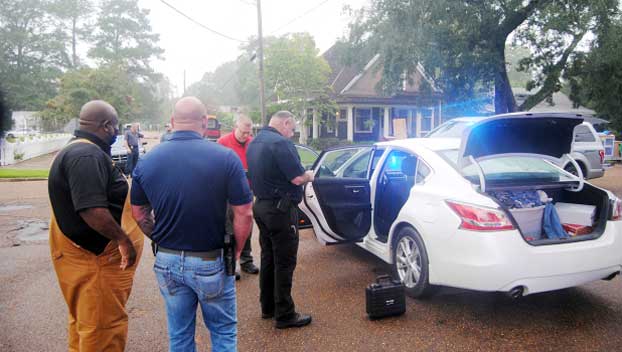 Three people were arrested — two adults and a teenager – were arrested Friday morning after they passed out in a car along a roadway prompting a passerby to call the police.

By the time police arrived, the three suspects were awake and sitting on the side of the road.

Unfortunately for them, when police checked the nearby car in which they had been sleeping, it was reported stolen a week earlier during an armed robbery.

A passerby called 911 just after 8 a.m. to report three individuals in a white car at the intersection of West Minnesota and South Jackson streets, stating that the occupants appeared to be passed out. When police arrived, the three were sitting alert on the side of the road, BPD Shift Supervisor Christian Davis said.

The car had been reported stolen one week ago from a home in the Rogers Circle area, where the owners were victims of an armed robbery, said Detective Sgt. Jonathan Alford.

The three suspects — Tremail Richardson, Letrell Barnes and a 17-year-old minor — were taken into custody, Alford said. The minor was taken to King’s Daughters Medical Center for evaluation, and Richardson and Barnes were taken to Lincoln County Jail.