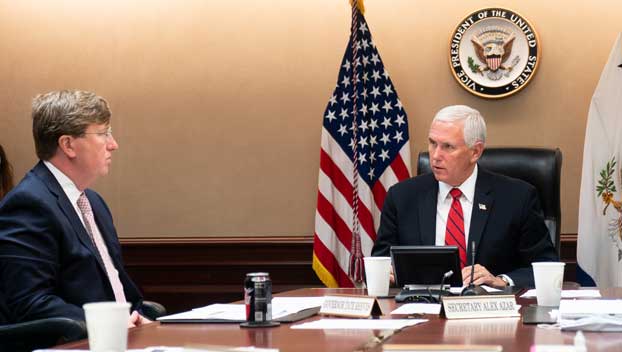 Mississippi Gov. Tate Reeves was at the White House Monday, just days before President Donald Trump contracted the COVID-19 coronavirus. Photos of the event showed Reeves and others without a protective face mask that federal disease experts say should be worn to prevent the spread of the virus.

Reeves hasn’t said whether he has been recently tested since the potential exposure but said in an interview with the Y’all Politics website that he felt good.

“I feel fine right now. I feel great and don’t have any reason to believe under current protocols that it would be necessary for me to self-quarantine,” Reeves said in the interview. “I’ve done it before and should that become necessary, I will certainly do so.”

Reeves urged Mississippians to pray for President Trump and first lady Melania Trump, who also tested positive for the virus.

“In Mississippi, we know the power of prayer,” Reeves wrote on social media. “We know that it is real, and that God heals.”

Reeves was at the White House on Monday appearing along with Trump as the president held a news conference announcing the purchase of millions of rapid test kits that would be distributed to states. Reeves also attended a meeting of governors along with Vice President Mike Pence. Earlier in the week, Reeves said he was tested on Monday during the press conference and he was negative then.

Pence shared photos of the meeting showing a number of people, including Reeves and Pence, at a conference room table none of whom wore face masks.

Hunters discover body in woods believed to be grandfather…