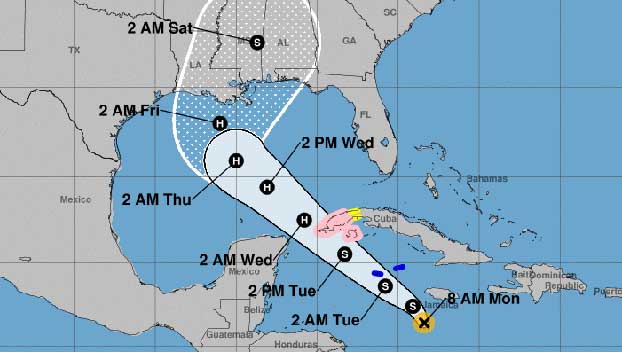 Tropical Storms Gamma and Delta have formed in the Gulf of Mexico and the Caribbean Sea, respectively, Delta is expected to grow into a hurricane and head for the Gulf Coast later this week.

Gamma is weakening and further weakening is expected, forecasters said, but urged residents along the Gulf Coast to keep an eye on Delta as it is expected to form into a hurricane over the next couple of days.

“(Delta) is forecast to approach the northern Gulf Coast late this week as a hurricane,” National Hurricane Center forecasters said. “While there is large uncertainty in the track and intensity forecasts at these time ranges, there is a risk of dangerous storm surge, wind, and rainfall hazards along the coast from Louisiana to the western Florida Panhandle. Residents in these areas should monitor the progress of the system and check for updates to the forecast during the week.”

Current forecast models show the storm may strengthen to perhaps as a Category 2 hurricane with sustained winds of up to 105 mph, perhaps weakening slightly just before landfall.

Trump says ‘I get it,’ then proves he doesn’t…